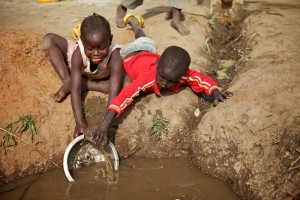 The only access to water before the borehole was drilled was unclean shallow wells which caused a number of health issues amongst the most vulnerable in the community.

The community of St Cecilia is home to over 400 households or approx 3.000 people. In Dec 2011 the communities first borehole was fitted by Cafod supplying the community with fresh water for the first time.
Each family is allowed to collect 5/6 jerrycans of water or 100 litres a day which is used for drinking, cooking and washing.
Each household pays approx 5 Sudanese Pounds or GBP1.50 a month to help with the maintenance. Those who cannot pay still have access to the water.