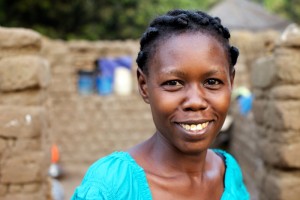 Elizabeth Emba (31) (blue top) who has 3 children and lives in the community of Hei Malakal in Mundri. She lives with her 13 family members in the tukle pictured behind.

She and her family returned from Khartoum in September 2011 following the countries independence in July 2011.