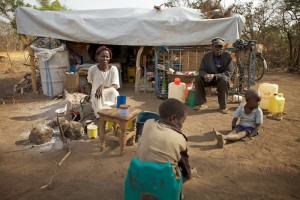 Alice Silvano (40) arrived back to St Peters in Mundri with her family from Khartoum in January 2012. She arrived with only a bag of maize to live on. She has two boys Silvan (4) and Elmas (8). Pictured outside her temporary home holding all her possessions. Her husband died and she now lives with his brother.