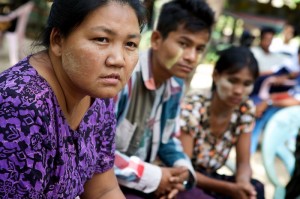 (All people can be identified but no names except the CO)

(In purple) Naw May Lyan (46) a Community Organiser (CO) for the The Myanmar Council of Churches talks with ex Burmese Army child soldiers and their parents in a village in the Irrawaddy delta region. May Lyan helped secure the release of these child soldiers by helping locate the children, most of whom were taken to the army between the ages of 14-16, then being the contact between the desperate parents and the government, army and the International Labour Organisation who helped secure them release papers.

She now lives in Yangon and has been a CO for 4 years and has dealt with issues such as child soldiers, land confiscation and labour disputes. She said, âI will carry on this work because the ordinary people are exploited and abused and if I donât stand up for them no one will help them.