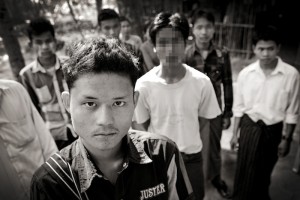 (Front) Child Soldier 1 (19) with a group of other ex Burmese Army child soldiers
(Identities can be shown but names changed. Identity of one person (Child Soldier 2) has been hidden due to him not having release papers-see Extended Captions Document for more details )

Child Soldier 1 standing with other child soldiers who have escaped the Burmese Army in a village in the Irrawaddy Delta region. They were all illegally tricked into joining the army when aged 14-16 years old. Most spent over 2 years in the army and were badly treated. They all managed to escape with the help of MCC Community Organisers working with their parents and other agencies such as the International Labour Organisation. (ILO)

(Front) Child Soldier 1 was 16 and living in the Irrawaddy Delta region when approached by a man who offered him a job as a driver but then took him to the Burmese army where he ended up serving for 2 years. He didn’t have to fight but had to work on the army farm, 7 days a week and wasn’t given any food. He and the other child soldiers were regality beaten and abused by the officers. He wasn’t able to contact his family for the first year. When he did, his sister contacted Myanmar Council of Churches Community Organisers Naw May Lyan and Sein Chit who then helped get the correct release papers from the International Labour Organisation. Without the CO help this would have taken a long time to achieve.
He is now working as a bus boy between the Delta region and Yangon and hopes to be a driver in the future.