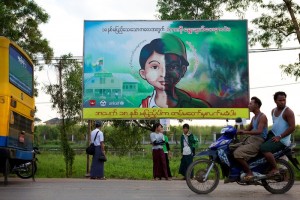 A Government and NGO sponsored billboard on the road into Yangon about stopping child soldiers joining the army. At the top it says, “What are the choices for the Under 18’s.”
Around the picture on the left it says, “Will you let them attend school.” and on the right, “Will you let them fight the enemy.”
The bottom line says, “If you are not 18 you are not allowed to enter the army. ”