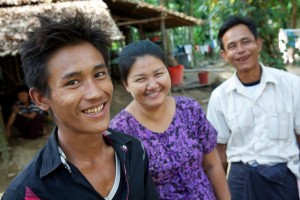 Child Soldier 3 (18)
(Identity can be shown but name changed)

Khin pictured with Myanmar Council of Churches Community Organiser Naw May Lyan and his father in the Irrawaddy Delta region.

Child Soldier 3 (18) was 14 and living in the Irrawaddy Delta region when his uncle sold him into the Burmese Army for $200 and a bag of rice. He ran away after 2 days but was caught, put in the army prison and beaten. He had to spend over 2 years in the army.
His father spent one year trying to find out about his son but got nowhere until he heard about MCC Community Organiser Naw May Lyan and how she had helped other families find their sons. They contacted her and May Lyan then managed to prove he was underage for the army and secure his release papers just as he was being sent to the front lines in the border regions. He is now working with his family on their farm in the delta region.