Once again, it’s been awhile but believe me, behind the scenes I’ve been very busy..!!

I haven’t actually shot many pictures which is a bit frustrating but as many of you know, a lot of time is spent sorting out computer systems, archives, marketing, research and everything else that goes into creating a new business and organising foreign assignments so thankfully getting out there and doing what you are supposed to and love doing is just around the corner.

Good progress is being made and I’ll hopefully be posting about some very exciting new projects coming up in the near future so watch this space…!!

As for now, I thought I’d let you know that an image from a shoot I did last year for Rotary Jersey has been awarded Nominee status in the 5th Annual black and White Spider Awards. I’m certainly more of a color shooter and this was my first black and white project I’ve shot in quite some time so it was a pleasant surprise for it to be recognised. The picture was part of a series I did at Jaipur Foot in India. You can see the whole series and text here but basically Jaipur Foot is an incredibly inspiring Ngo set up by the highly energetic and dedicated D.R Mehta. Every day, hundred of people from all over India travel to Jaipur to receive artificial limbs and polio survivors are given tricycles or calipers. All of these services are given for free and it’s literally a lifeline for thousands of Indians who from here can start making a life for themselves with their new found mobility. I only had two days there after shooting the polio eradication story but found the atmosphere positively infectious. In a matter of hours you saw peoples lives transformed.

The image below was shot in the fitting centre where people wait for the limbs to be made. The guy on the left lost his leg in a train accident (most amputations are caused by train incidents) and on the right is an army officer with his new artificial limb next to him. What I liked is the fact all limbs and fittings are completed in an open room so patients can see exactly what is happening. You can see on their faces they are apprehensive but by having everything open the whole process is hopefully demystified. 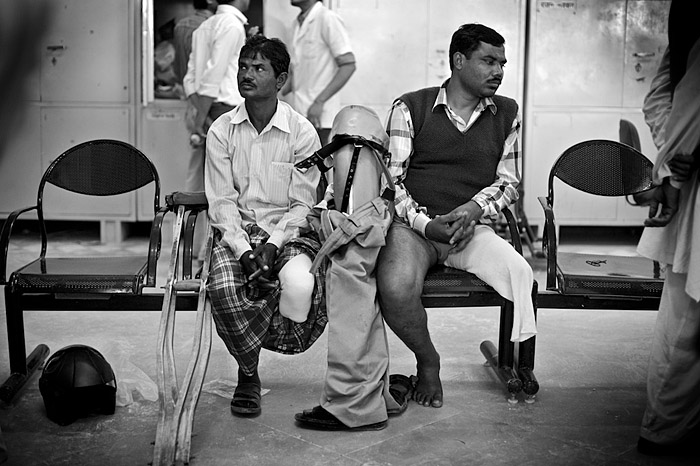 A Jaipur artificial limb stands between two amputees waiting for a limb fitting.