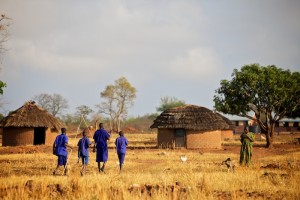 School boys in uniform walk to school through the village of Luzira in Northern Uganda. The village was abandoned and people fled mostly to Patongo IDP Camp nearby following attacks by the LRA. They stared to resettle back in Luzira from 2007.