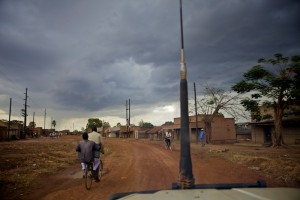 On the road to former Operat IDP camp from Patongo town in a Caritas vehicle during a rain storm.