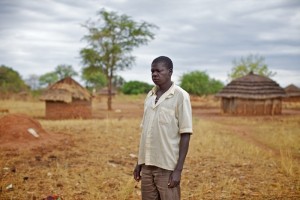 Ongom Donsiano (36) who was abducted by the LRA in 1998 from Luziro village in Northern Uganda. He was sent to South Sudan for training and became part of an elite fighting unit. He became a sergeant and then a commander and gave orders for attacks on civilians. In 200? he decided to leave the LRA and contacted the Ugandan army giving them information which led them to defeat the LRA in the area surrounding his home village of Luzira. He is now the head of the Luziro Farming Collective.