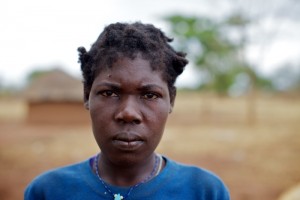 Abur Carla (28) who was abducted by the LRA from her home village of Luzira in Northern Uganda in 2001 for 6 years. She was forced to become a fighter, loot and abduct other people. Many abductees were also forced to kill fellow abductees and villagers. She managed to escape in 2007 during a government forces attack and fled to Patongo town. She has now returned to live in Luzira village.