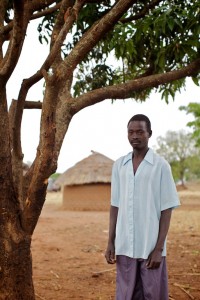 Odoch David (21) who was abducted in 2000 for 3 years from his home village of Luzira in Northern Uganda. He was taken to Kitgum where he was trained to fight then sent to the frontline and operated in both Uganda and Sudan. He was involved with a large attack on a Ugandan military base in Kitgum. He escaped after being surrounded by government forces and taken to the nearby town of Patongo. He returned home to Luzira where he found out his father was dead and his brother had also been abducted. He now has a wife and 3 children and lives in Luzira village.