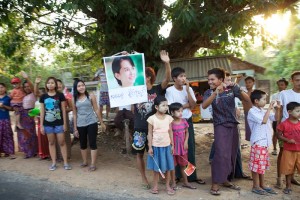 Villagers along the road show support for National League for Democracy (NLD) supporters travelling from Rangoon (Yangon) to Kawhmu, south west of Rangoon (Yangon) where their leader Aung San Suu Kyi is standing in the by-election.