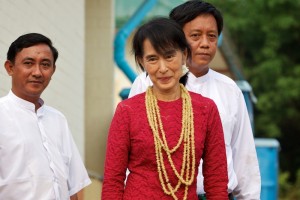 On election day flanked by her security guards NLD leader Aung San Suu Kyi visits a polling station in Kawhmu, south west of Rangoon (Yangon) where she is standing in the by-election.