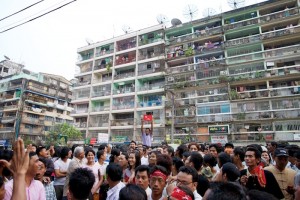 A large crowd in Mingalar Tuang Nyunt Township in Rangoon (Yangon) outside the ballot counting station wait in anticipation as the results start coming in following the by-elections.