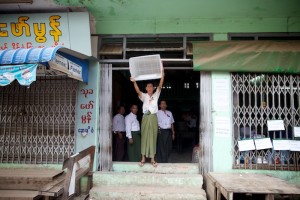 An official shows an empty ballot box to the large crowd gathered to hear the results of the by-election in Mingalar Tuang Nyunt Township in Rangoon (Yangon) following the by-elections.