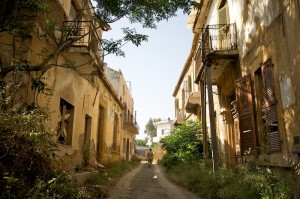 A UN peacekeeping soldier patrols the narrowest section of the UN controlled Buffer Zone or the Green Line in the divided city of Nicosia on the island of Cyprus. Since 1974, abandoned shop fronts and houses just metres apart have became the front line between the Greek-Cypriot southern region and the Turkish-Cypriot northern region. Soldiers have now pulled back from these positions to help relieve the tension between both sides. Highly restricted and inaccessible to all but UN personnel, the decaying buildings have remained untouched and left to ruin for over three decades.