I’ve finally recovered from jet lag and have started working on a few images from my recent trip to Belfast in Northern Ireland. This forms the third part of my long term project on borders and barriers around the world.

Although a very short trip I still managed to get around most of Belfast thanks to the many community groups who helped out. I met some fascinating people who have dedicated large parts of their lives to help understand and report on the consequences of these peacelines or peace walls and the overall situation in Northern Ireland. I also met and interviewed participants of ‘The Troubles’, many of whom spent years in prison and were released as part of the peace process and now work in community relation groups.

Belfast is quite possibly one of the friendliest places I’ve worked in but spending time in the interface areas (places where Catholic and Protestant communities live next to each other), away from the now buzzing city centre, an air of uncertainty, distrust, anxiety and underdevelopment is still very much evident. On either side of the walls, life continues as normal and many people are happy to drive from one area to another but most said there are areas they would not feel safe to walk in. In many cases, people who live just meters apart, divided by a 20 ft high multi layered barrier have never met or even have the desire to meet each other. Segregation permeates all areas of life both physically and psychologically, from housing where over 95% of social housing is either Catholic or Protestant to education where only around 5% of children attend integrated schools. Whilst most of the violence of the 90’s has stopped, rioting in flashpoints still does occur and virtually all residents who live next to the peacelines and interface areas do not want the walls to come down. At night, gates are closed to both traffic and pedestrians, effectively cutting off Protestant from Catholic areas. They feel safer, at least physiologically, with these physical barriers intact which they say they now hardly even notice.

The first peacelines where erected back at the start of ‘The Troubles’ in the late 60’s and were supposed to be temporary structures separating the Loyalist Protestant from the Republican Catholic communities. Ironically, since the peace agreement over 10 years ago, many more barriers have been built. In 1994 there were approximately 24 walls, there are now an estimated 90 structures in place throughout Belfast from obvious 20 foot high walls to thinly disguised disused houses, waste land and community gates with the latest wall being built little over 24 months ago.

I’ll be making a return trip there next year to continue this story so below are some images taken during my time there. I’m also working on editing audio and video I shot. I really enjoyed shooting video for the first time and think the audio interviews I took really add to the sense of the place. Multimedia is fast becoming the most exciting and informative way to show stories so once I’ve got the basics of FCP, I’ll post an update here.

Any questions or comments you have please get in contact…… 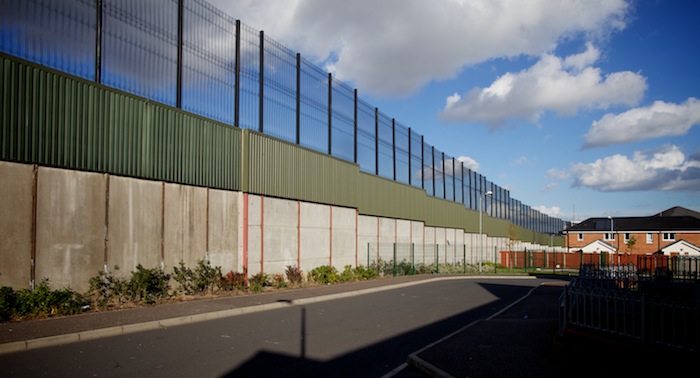 The main peace wall that runs for over 5km dividing the predominantly Protestant Shankill Road Area from the Catholic Falls Road in West Belfast. Seen from the Catholic area of St Galls Avenue just off the Falls Road, many of the houses in this area have been rebuilt since the troubles in the 1990's 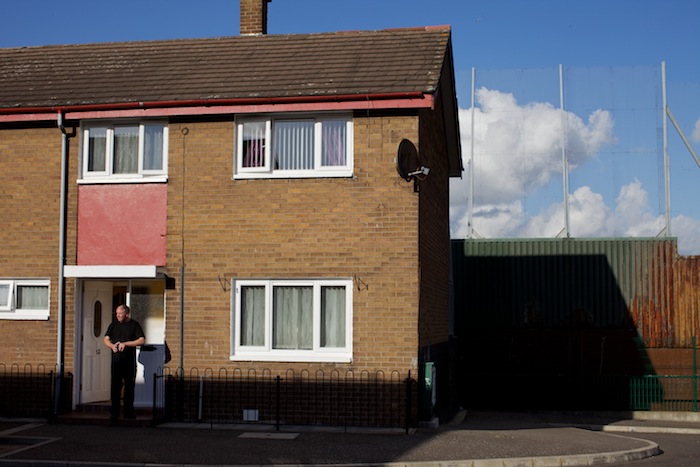 A resident of Bombay Street with the peace wall backing onto his property in West Belfast. This street became the epicenter of violence during the early days of the troubles and most of the original houses were burnt down. 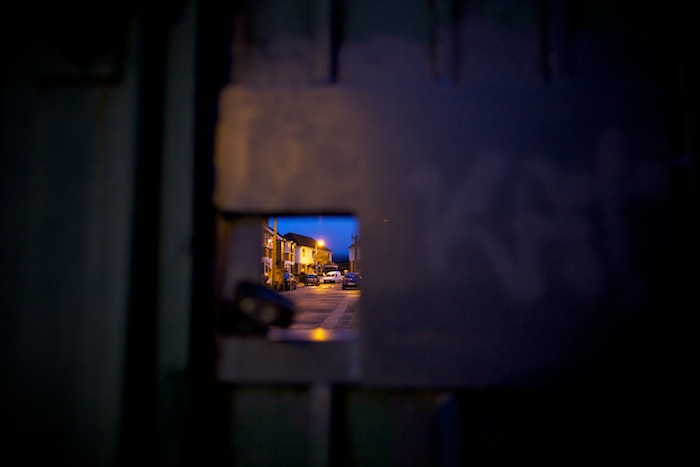 Gates in peace walls all over Belfast are locked at night separating the Catholic areas from Protestant areas. Looking through the Workman Avenue gate into the Protestant Woodvale estate in West Belfast. 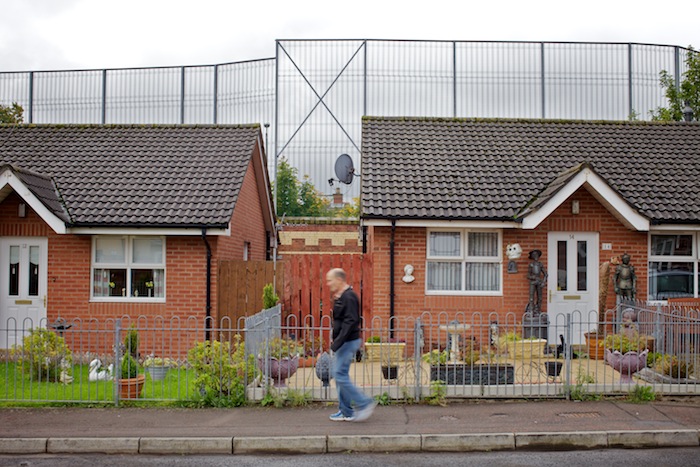 A resident walking past housing next to the peace wall in Protestant Woodvale area in West Belfast. 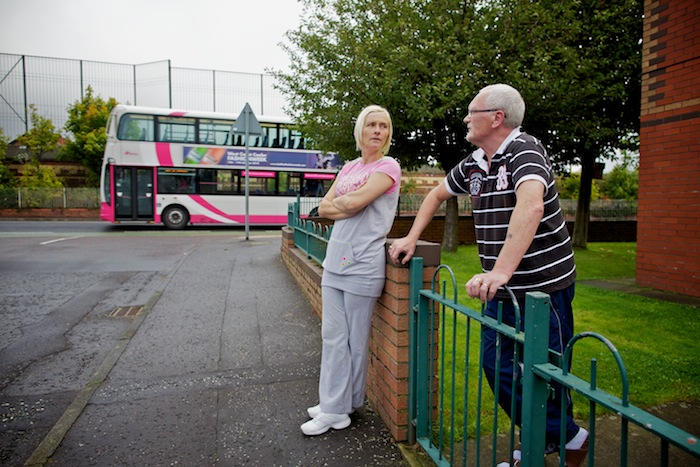 Joseph Hasett a Catholic resident on the Springfield road who lives opposite the peace wall separating them from the protestant Woodvale estate in West Belfast. 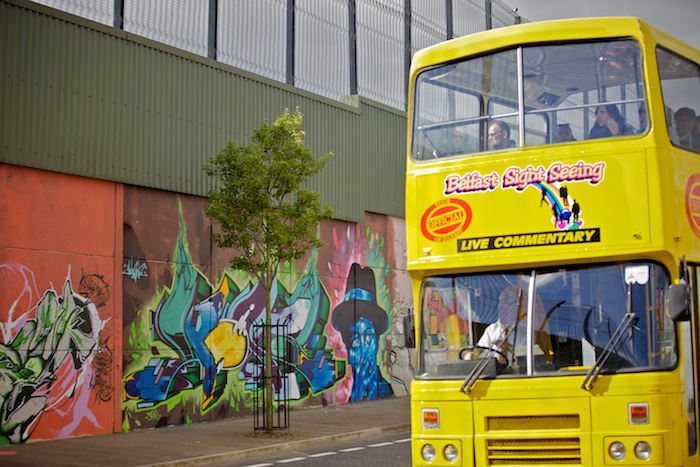 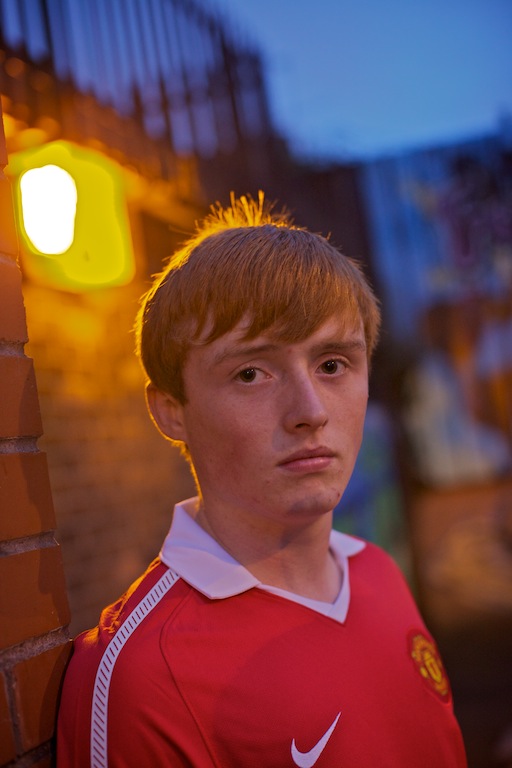 Caoileann Meehan (16) from the Catholic area of Springfield Road. He says he doesn't mix with the Protestant teenagers on the other side of the wall and never goes over there. He believes that violence would dramatically increase if the walls came down. A young Protestant family go through the Workman Avenue gate in the peace wall in West Belfast. At night the gates are closed. Catholic houses on the Springfield Road opposite Workman Avenue, a notorious flashpoint during the marching season. The houses are bricked inbetween to stop rioters entering further into the residential area and the front windows removed. 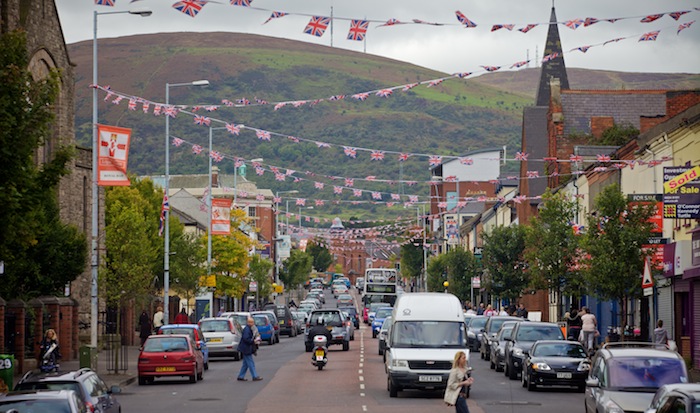 The Shankill Road complete with British flags reflecting their allegiance to Britain. Many Protestant areas are adorned with flags as a means of identity. Segregation is common in Northern Ireland's education system with only 3-5% of children attending mixed schools. Pupils studying at Springfield Primary School in West Belfast, a segregated Protestant School in a mostly Catholic area. 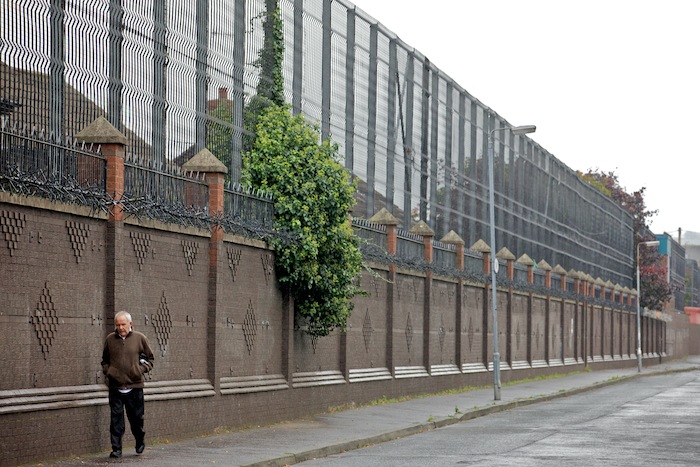 A man walks along the interface area and peace wall in Bryson Street dividing the Short Strand area of East Belfast, a Catholic enclave of about 3,500 people in a predominantly Protestant area. 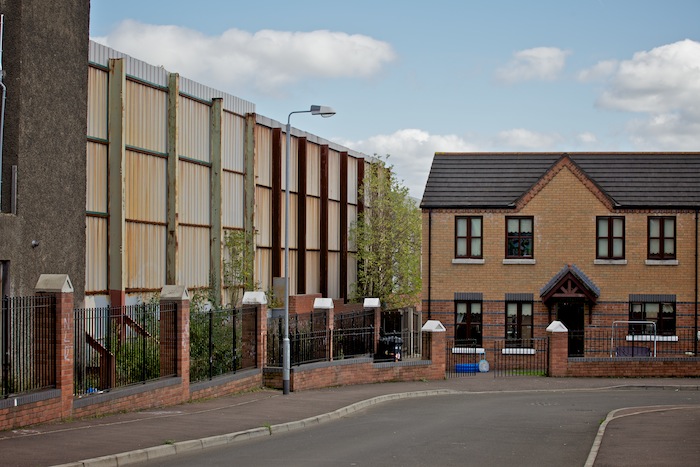 An old and rusty peace wall shields new housing in the Catholic New Lodge community from the Tigers Bay Protestant area on the other side in North Belfast. 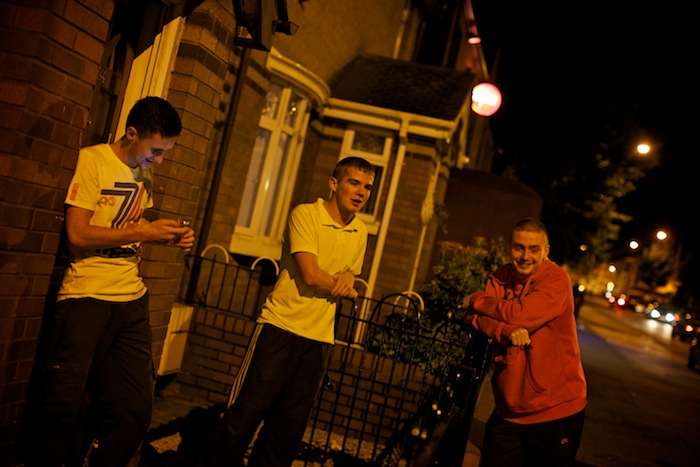 L-R Padraig Smyth (18), Brian McCartney (19) and Gerard Morgin (20) on Springfield road next to the peace wall in West Belfast. They say they don't ever go over to the Protestant side of the wall. They have no bad feelings towards the Protestants but don't want the wall to come down. A peace wall in Townsend Street looking from the Catholic side towards the Shankill Protestant area. This gate is closed at 5.30pm and opened at 7am. 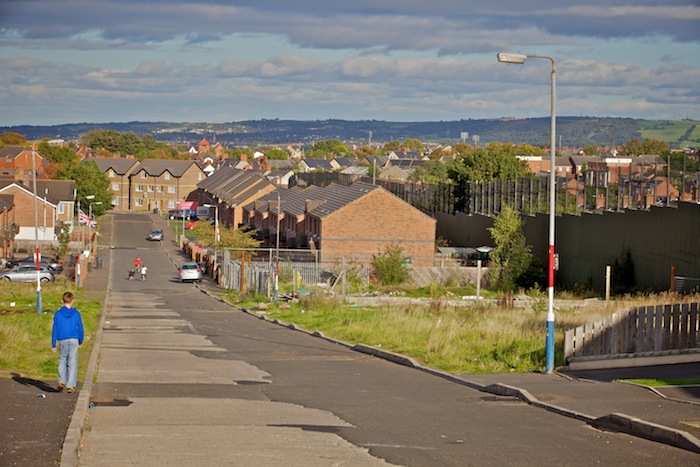 A peace wall and interface area in Protestant Glenbryn Park with Catholic Alliance Avenue on other side.