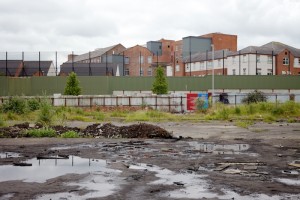 The Protestant side of the walls often have waste land and vacant housing. On the Catholic side, housing is much more dense with few green zones as the need for housing is much higher. This is one of the reasons why many Loyalists/Unionists want the peace walls to remain to enable them to retain their territory despite falling numbers in certain areas.