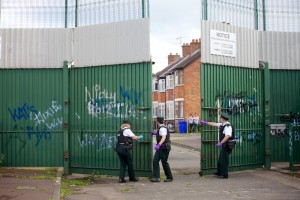 The main gates are only opened twice a year to allow the parade to pass through. The Springfield Residents Action Group stage a peaceful protest under a heavy police presence.

The annual July 12th Protestant Orange Order celebrations see thousands of Orangemen, marching bands and supporterâs parade through Belfast commemorating the Battle of the Boyne in 1690 where the Protestant King William of Orange defeated the Catholic King James.