I finally made it back to Belfast last week to continue my long term project on Borders and Barriers.

My visit coincided with the annual July 12th Protestant Orange Order celebrations which see thousands of Orangemen, marching bands and supporter’s parade through Belfast commemorating the Battle of the Boyne in 1690 where the Protestant King William of Orange defeated the Catholic King James.

Below is just a small selection of images and I’ll be following up by building on the multimedia project having also shot some video and recorded many interviews.

Belfast was once again an intriguing place to work, full of very colourful characters with quite incredible histories who are now working towards creating a more peaceful future. There is still some way to go, however great progress has been made. 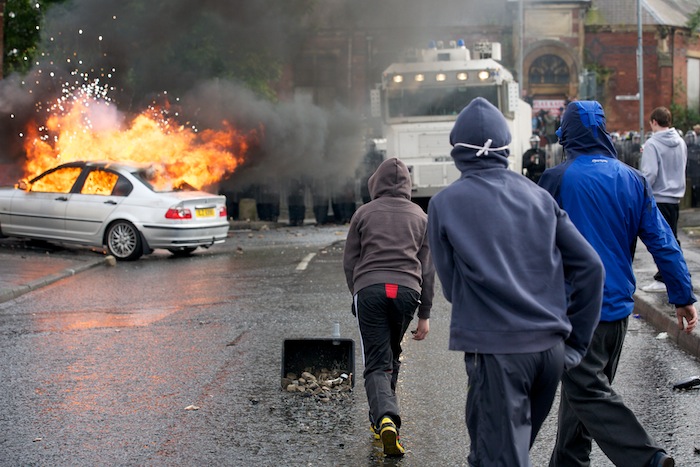 Youths rioting in Brompton Park, a Catholic area of Ardoyne in north Belfast following the annual Orangemen parade past the contested Ardoyne shops on July 12. 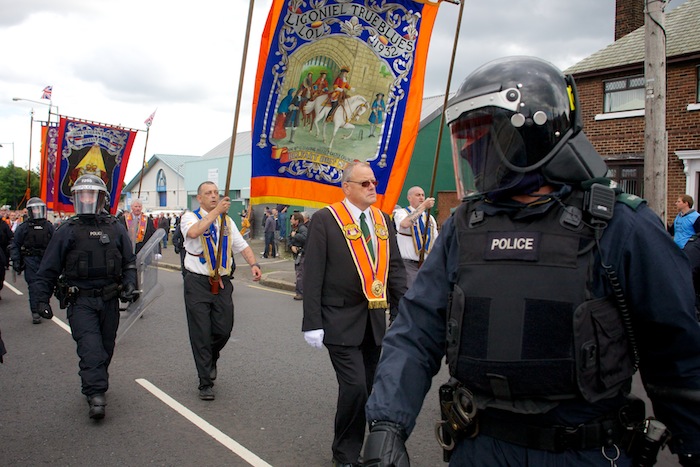 A much smaller group of Orangemen than usual parade past the contested Ardoyne shops in north Belfast surrounded by PSNI riot police during the annual July 12th parades. 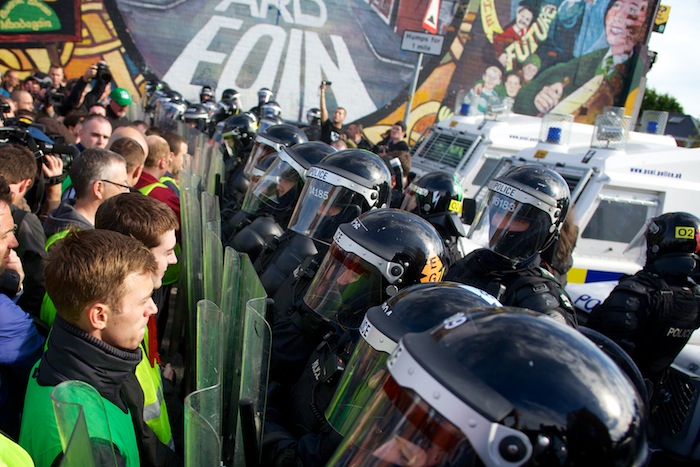 PSNI riot police stopping Greater Ardoyne Residents Collective members from staging their own counter parade. They were eventually let through which led to brief but violent clashes. 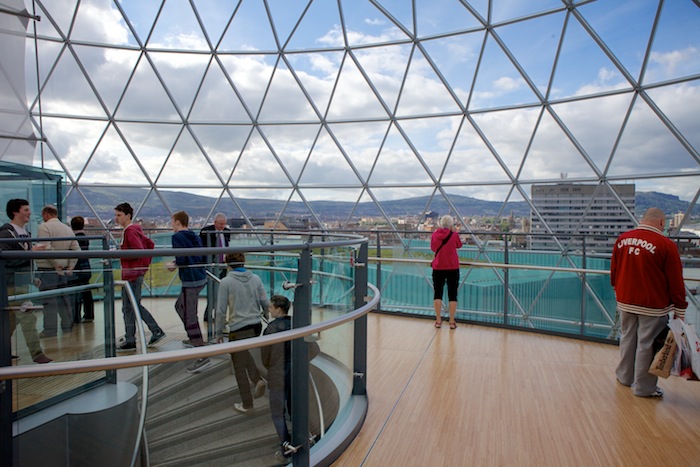 The peace dividend has paid off in central Belfast with many new shopping centres such as Victoria Square. They serve as a shared or at least neural space generally free from sectarian divisions. 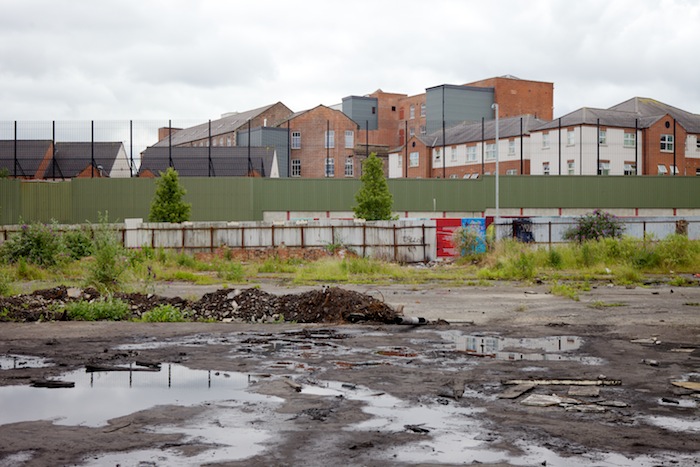 The same cannot be said for the majority of interface areas which saw most of the violence during the conflict but have received very little since the peace signing. Here the Cupar Way peace wall seen from Conway Street, Loyalist Shankill Road area, West Belfast. Behind the wall is the Catholic side of Conway Street in the Clonard area, some of the most deprived wards in Belfast. This is the longest peace wall in Belfast and one of the first to be put up separating the Protestant Shankill Road from the Catholic falls road. 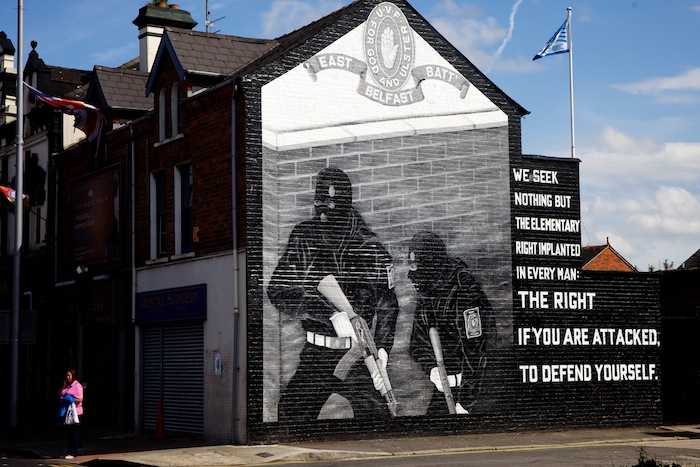 An Ulster volunteer Force mural in a Loyalist area of East Belfast. Reminders of the conflict are omnipresent including the demarcation of territory through the use of flags and murals which often show allegiance to various banned paramilitary groups making life returning to normality difficult. 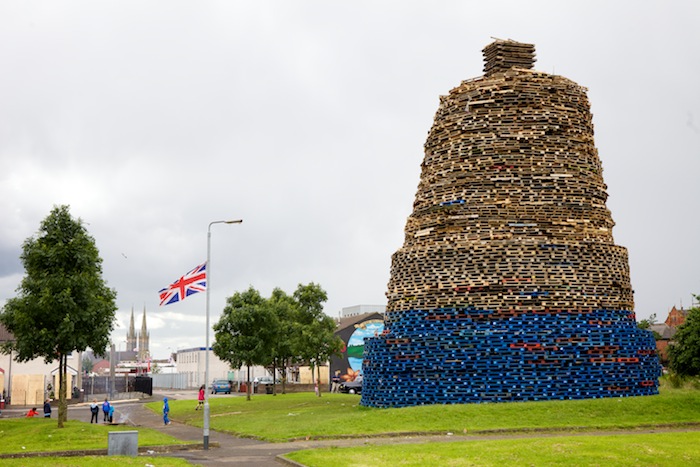 A bonfire in Lower Shankill, West Belfast. Huge bonfires are constructed in Loyalist Protestant communities in Belfast for burning on the Eleventh Night, the eve of the annual July 12th Orange Order celebrations. 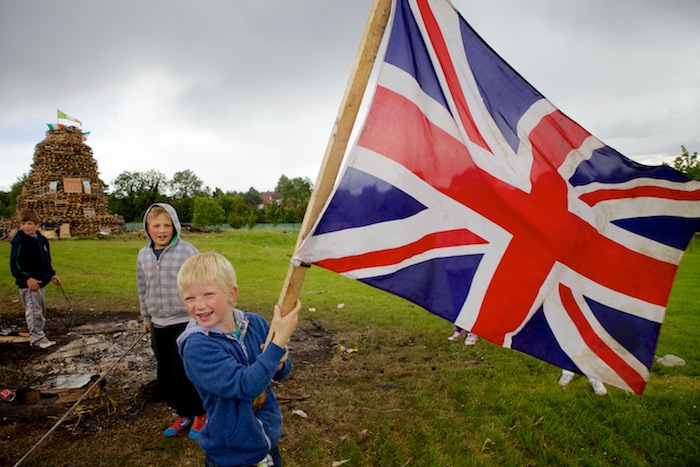 Children fly the British flag whilst protecting their bonfire in Suffolk, a Protestant enclave in the Catholic dominated area of South Belfast. 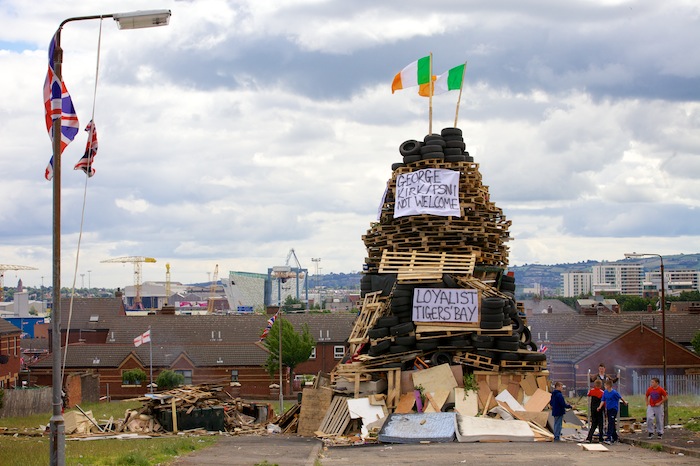 A bonfire in Tigers Bay, north Belfast which is one of the most underdeveloped wards in Belfast. The Irish tricolour flag is often placed on top of the bonfires for burning as well as other sectarian symbols and banners which creates tensions between the two communities. 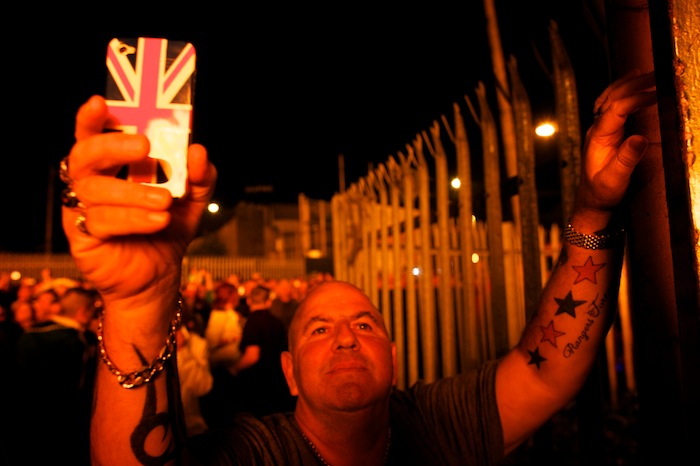 Signs of allegiance come in all forms including mobile phone covers. A Loyalist at the Sandy Row bonfire in central Belfast. 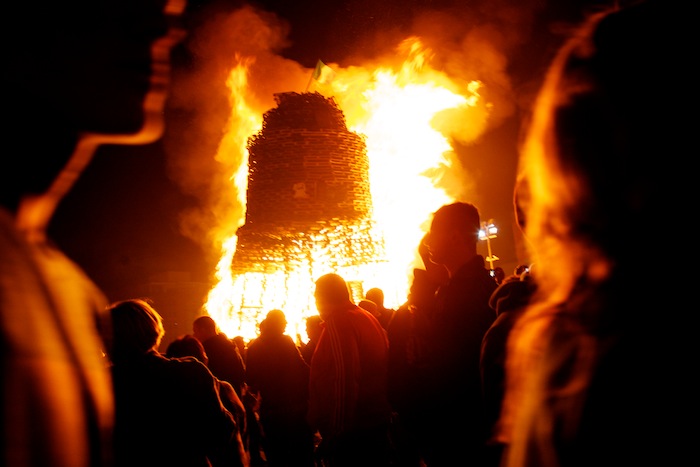 Loyalists celebrate the burning of the Sandy Row bonfire and Irish tricolour flag on the Eleventh night. 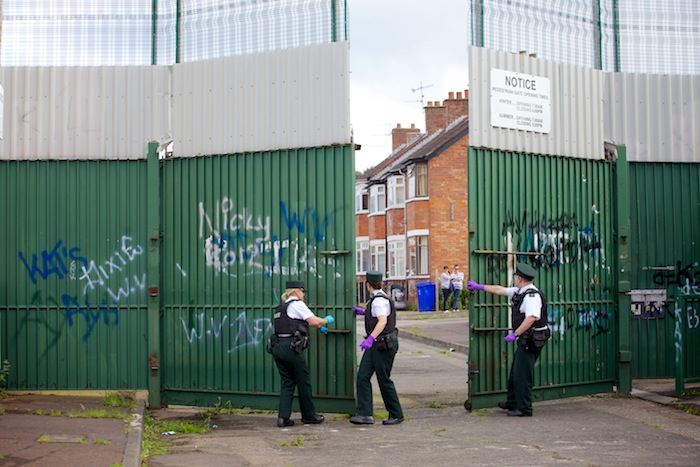 The Workman Avenue peace gates are only opened twice a year by Police to allow the contentious Protestant Orange Order Whiterock feeder parade in West Belfast to pass through them. The parade passes along the mostly Catholic nationalist Springfield Road interface and through the Workman Avenue peace gates then onto Shankill Road. Whilst violence at this parade has reduced over the years it does set back community relations. 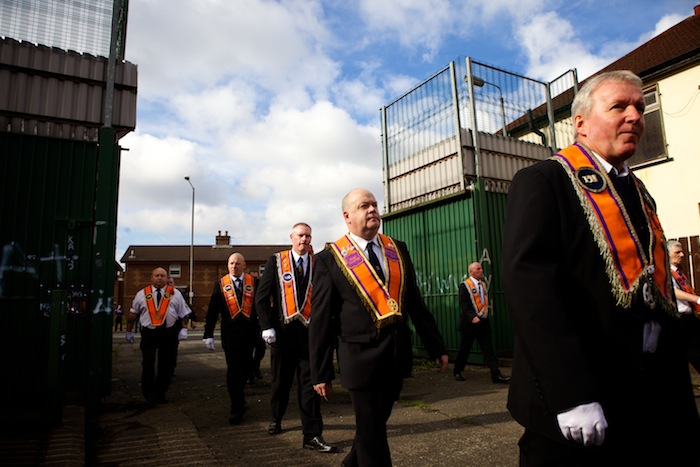 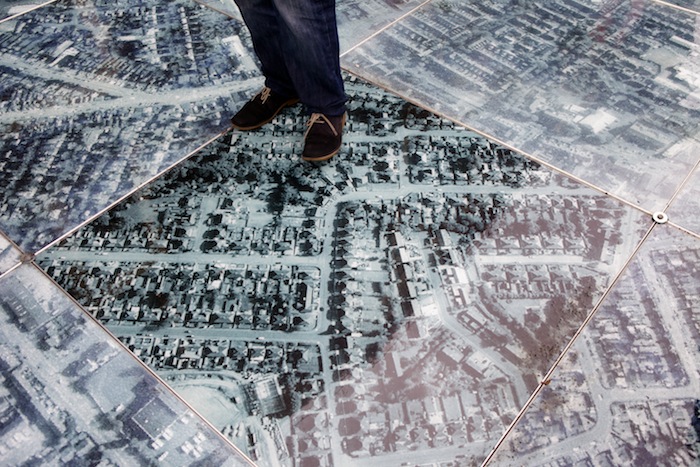 Ambulatorio, an art based peace building initiative between the peace gates on the Flax Street interface in North Belfast. Artist Oscar Munoz has laid down panels of aerial pictures of north Belfast between the peace gates which will be opened for a short time allowing community members to cross the interface through this route for the first time. A confidence building concept, the installation invites residents to imagine walking around a north Belfast free of walls and gates.