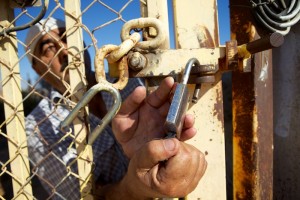 Hani Amer (55) who has 6 children and wife Munira. His house in which he has lived for 39 years is surrounded by the separation barrier and fencing cutting him off from the Palestinian village of Mas’ha and behind his house the Israeli settlement of Alkana. The wall was built in 2003 and he had to fight to be given a key to the only gate that gives him access to the outside world.

Building of the Israeli Separation Barrier started in 2002 and continues to be built throughout the West Bank. The 709 km long barrier consists of sections of 8 metre high concrete walls and 3 metre high wire and mesh fencing. Over 85% of the barrier is built within the Green Line on confiscated Palestinian land.