Barriers to a Positive Peace- The Israel-Palestine Separation Barrier

I was able to make a short trip back to Israel and Palestine in September to continue my long term project on communities divided by separation barriers. Everytime you visit this region something has changed, not usually in a positive way, and this trip was no exception. It terms of trouble and violence it was probably the quietest time I’ve experienced there.  The usual Friday protests were still happening in Ni’lin and Bil’in but with much reduced turnout and it was unusually calm yet tense on the streets, as if everyone was waiting for something to happen. Well that calmness was certainly broken with the latest confrontations in Gaza which has led to widespread unrest throughout the rest of the West Bank.

As for the Separation Barrier, it continues to be a major obstacle to the peace process, whatever remains of it, and to the day to day lives of people who are surrounded by the barrier. The aim this time was to meet a number of people who have been directly affected by the walls construction. I’ll be heading back to this region again soon and will spend more time meeting Israeli residents to hear what the wall means to them. Here are a few images from that trip and a brief synopsis behind the concept of this project.

Barriers to a Positive Peace

Walls are highly political and represent the physical manifestation of failed policies to overcome the root causes of each of these conflicts. Whilst providing short term gains in security they are inevitably ineffective as long term solutions to creating a sustainable positive peace. Whilst resolutions to the conflicts are sort, the most affected by these policies are the people who live under their shadow. Daily lives are shaped by their presence creating both deep physical and physiological challenges for residents. It may mean walking extra miles to go to the shops, the fear and indignity of passing through checkpoints that separate family and friends or even just the sheer physical presence of such structures in their back yard. However, to some communities they provide the desired protection and a reassuring knowledge that they are physically separated from ‘the other’.  Walls are a symptom of conflict, not a cause. It many cases they are the first thing to go up during times of violence. They may be the last structures to come down to enable peace. 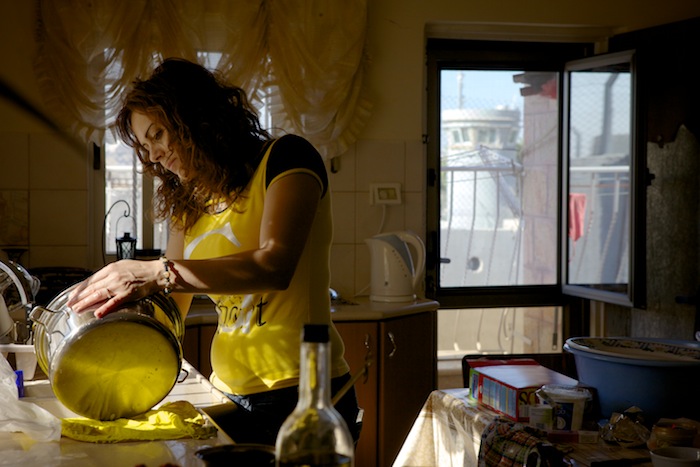 Claire Anastas, a Palestinian Christian in Bethlehem washing up with an Israeli watchtower looking directly into the families living space. The wall was built here in 2004, two weeks before Christmas and surrounds her house on three sides. The sacred site of Rachel's' Tomb is on the other side of the wall. She said 'This affects us the most because whenever we wake in the morning we look outside and see only walls and cameras.' 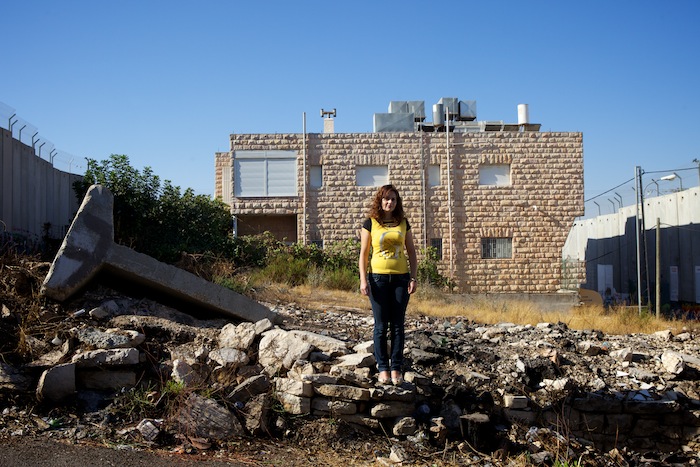 Claire Anastas, a Palestinian Christian in Bethlehem who had her house surrounded on three sides by the wall. The economic impact of the wall has been extreme. Claire explains, ' We used to have an organic fruit and vegetable shop, a car mechanics workshop and souvenir shop. This road running along side my house used to be the main road between Bethlehem and Jerusalem and was very busy with markets and tourists visiting Bethlehem and Rachel's Tomb. Since the wall was built cutting us off we have lost all our business.' 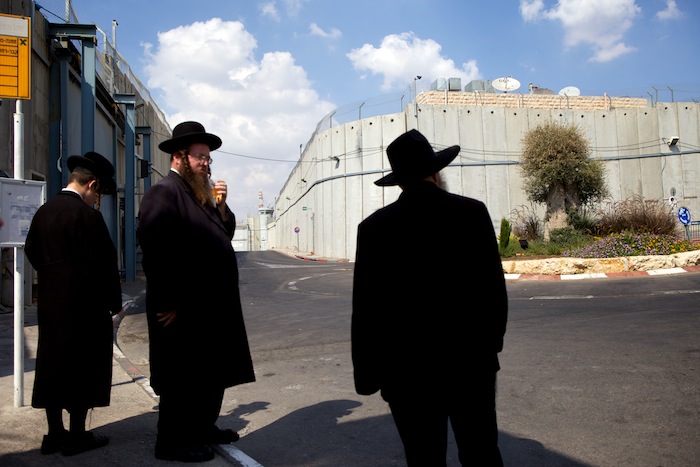 Orthodox Jews wait at a bus stop after praying at Rachel's Tomb in Bethlehem. Claire Anastas's house can just been seen on the other side of the wall. Claire remembers when the road was a thriving market area attracting people from all religions to shop and visit the sites, ' We used to be friends and when we used to live together we used to exchange cultures and life and know about each other more.' 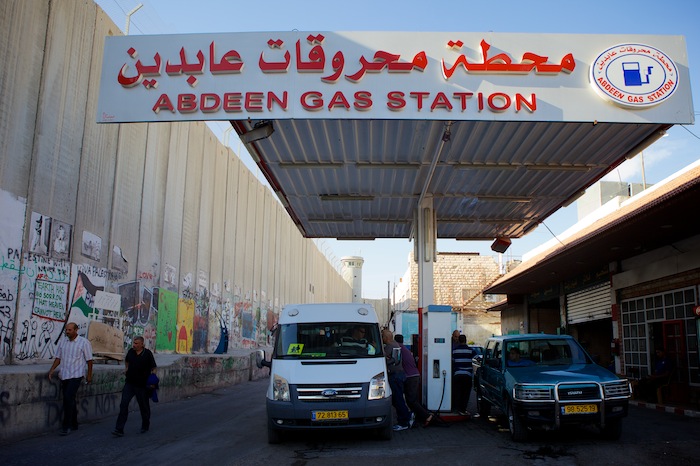 The separation barrier in Bethlehem. In many areas, the wall is constructed in what used to be lively commercial districts. Many businesses now struggle to survive as demand has dramatically reduced. 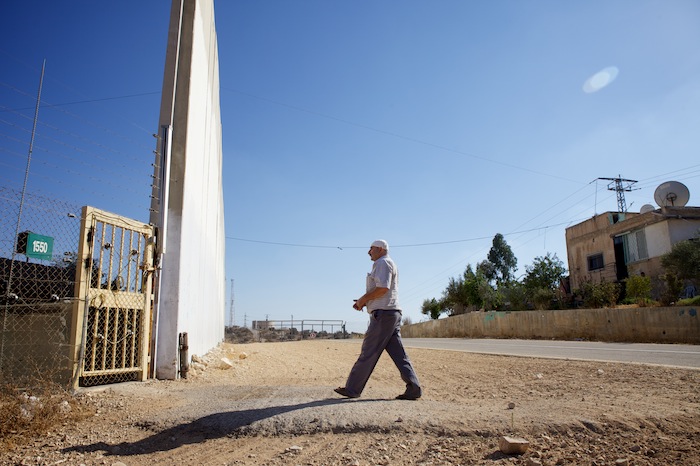 Hani Amer (55) who has 6 children and lives with his wife Munira. His house in which he has lived for 39 years is surrounded by the separation barrier cutting him off from the Palestinian village of Mas'ha. Behind his house is the Israeli settlement of Elkana. The concrete section of wall in front of his house serves no security purpose and Hani says was built out of spite to spoil his view. 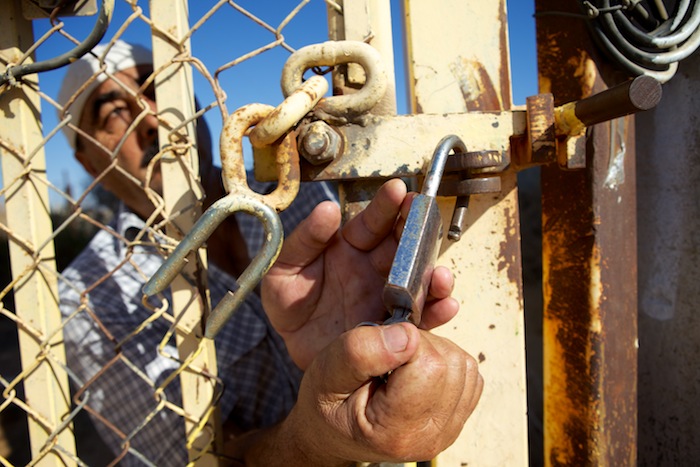 Hani Amer (55) unlocking the gate he and his family has to use to enter his property. The wall was built in 2003 and he had to fight to be given a key to the only gate that gives him access to the outside world. 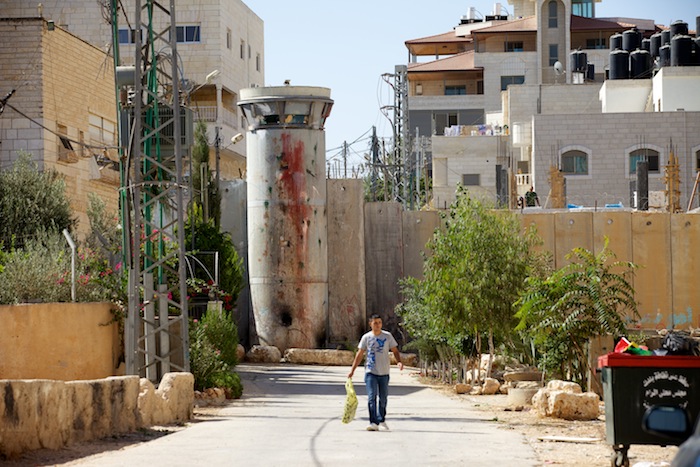 The wall not only divides Israel from Palestine but also separates Palestinian communities resulting in many families and friends being cut off from each other. The wall here runs directly though a Palestinian community in Ar Ram close to Jerusalem. 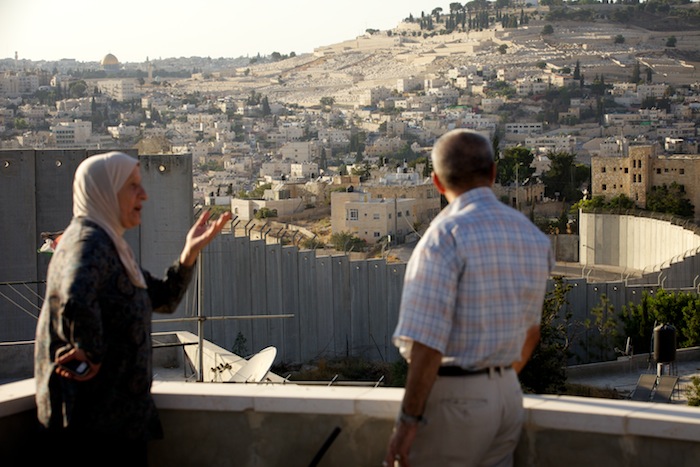 Ali Ayyad (62) with his sister Zainab Bader at her house in Abu Dis. Ali's house can be seen just on the other side of the wall. It used to take just a few minutes to walk to each others house but since the wall was built it now takes at least 30 minutes by taxi costing $30 or 1.5 hours costing $7 by public transport. The Dome of the Rock can be seen in the background showing how close to central Jerusalem the wall has been built. 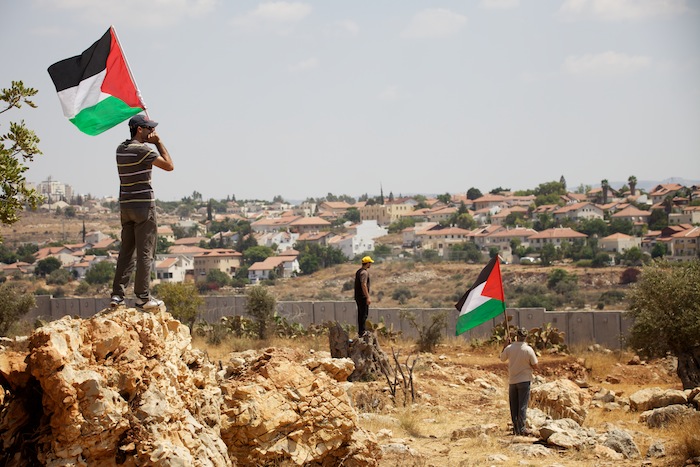 Residents of Ni'lin and supporters protest against the separation barrier that has separated them from large tracts of their valuable farming land. These protests have been held every Friday for years. 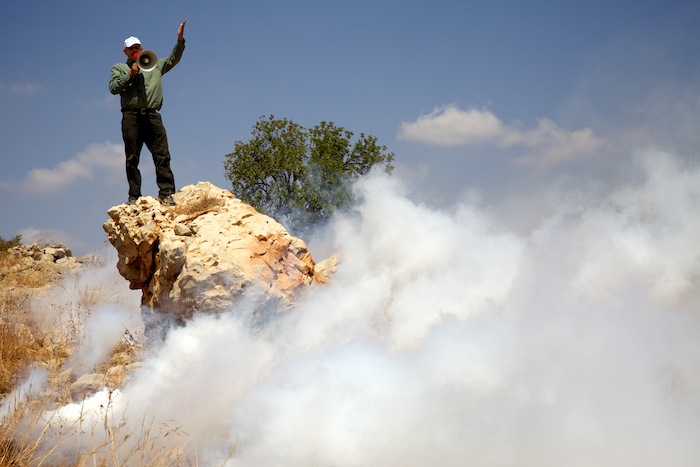 Surrounded by tear gas, a protester from Ni'lin chants through a loudspeaker towards Israeli soldiers on the other side of the wall.. 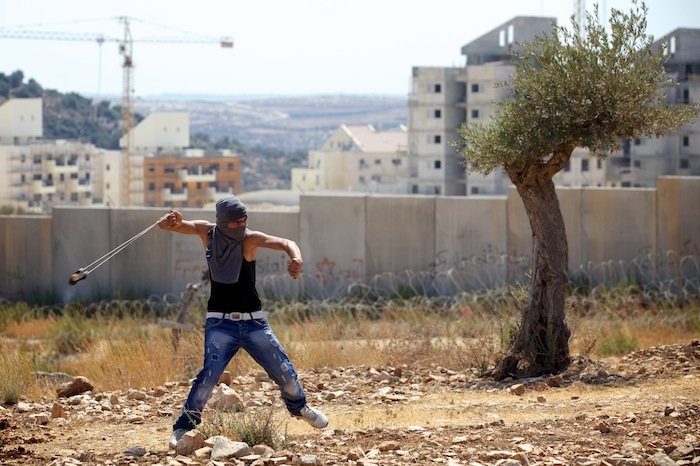 A young Palestinian man uses a slingshot to aim rocks at Israeli soldiers during the weekly protests in Bil'in. The illegal Israeli settlement of Matatyaho Mezrahi can be seen under construction behind the separation wall. 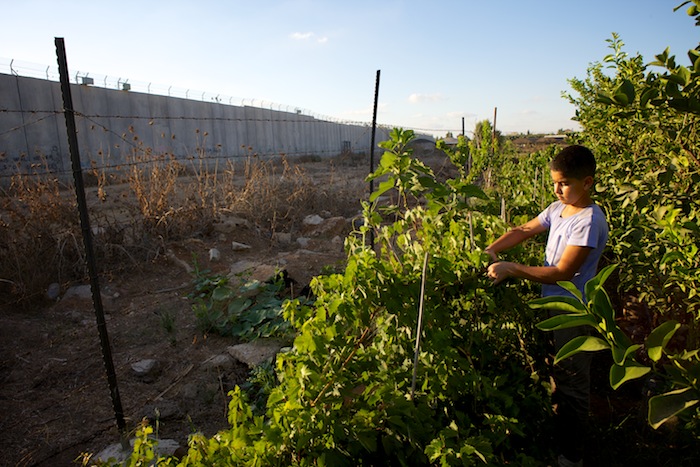 Mohammad Faraj (11) works on his fathers land next to the separation barrier that surrounds the town Qalqiliya. A dead zone exists next to the wall further reducing the amount of available farming land. 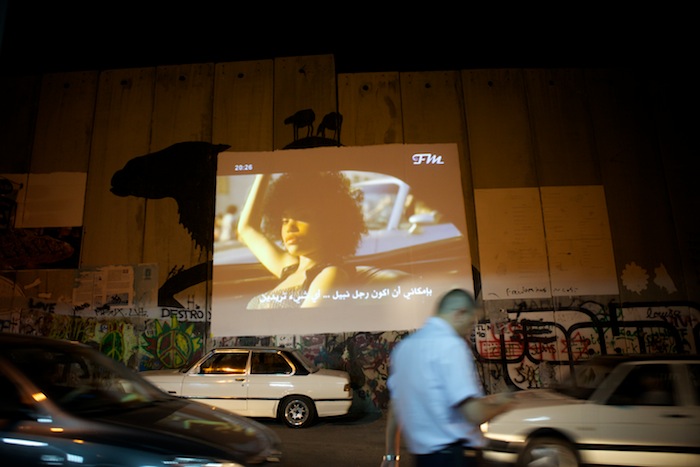 The Wall Steakhouse which screens movies and sports projected onto the wall in Bethlehem. 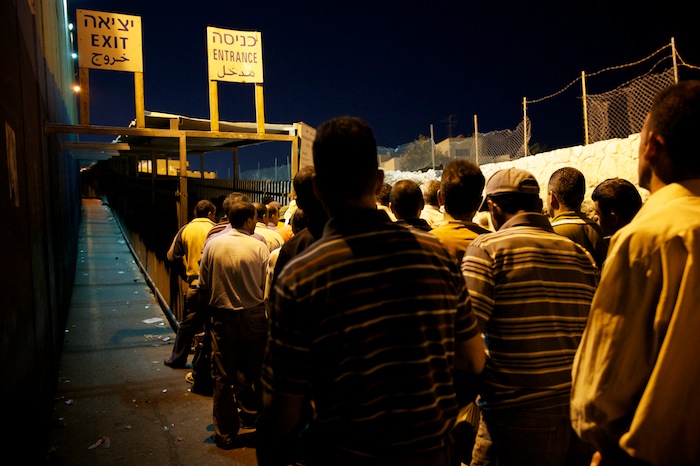 Workers wait to be allowed into Israel from Bethlehem at checkpoint 300. It often takes hours of queuing in the metal cage before they can pass through the checkpoint. 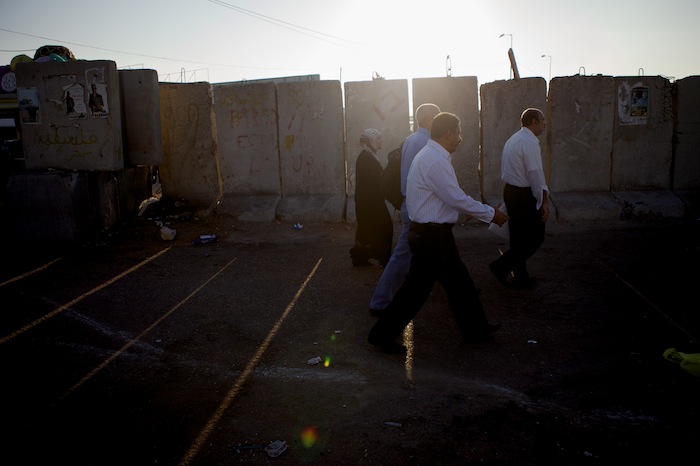 Early morning at the Qalandia checkpoint, one of the main checkpoints into Jerusalem from Ramallah in the West Bank. 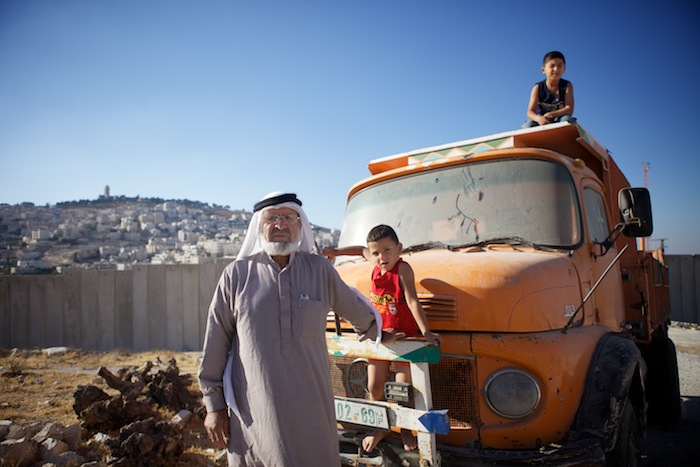 Abu Mohammad (65) with his grandsons Saed & Mohammad in his broken down truck he can no longer afford to fix in Bethany on the outskirts of Jerusalem. He used to be a driver before the wall was built 10 years ago and business was good. Now he has no access to Jerusalem and there is very little work in this area. 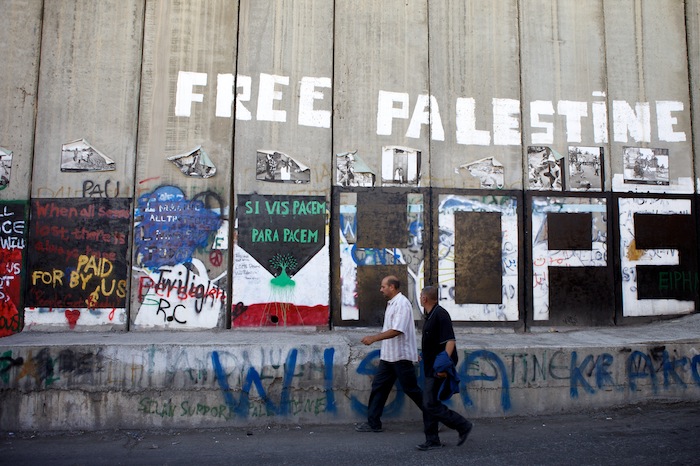 The Wall in Bethlehem.