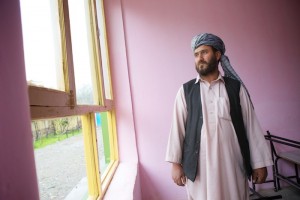 Jan Muhammad (50) is a Shura Council member and is also on the Parent Teacher Committee at Bibi Maryam Girls High School. Pictured in a classroom at the school in Jalalabad, Nangarhar Province. He could be described as an activist who strongly believes in education for all. He is a labourer but sends all his children to school and firmly believes in education. His son is at Agricultural University, his daughter Sitara (19) is a teacher at this school and he picks her up after work to take her to teacher training college so she can improve. He also has two other younger daughters Spogmay (15) & Hungama (12) who attained the highest grades for her year.

The PTC is formed up of parents, teaches and people from the religious Shura council. Their main task is to act as a bridge between the school and community with the aim of promoting education and maintaining high levels of attendance.

Thirty years of chronic instability and conflict, and the almost complete lack of educational opportunities for
children under the Taliban, have had a dramatic impact on childrenâs education and well-being in Afghanistan. There are now 2.4 million Afghan girls enrolled in school, compared to just 5,000 in 2001. While the numbers are encouraging, Afghan girls still face many barriers to receiving an education. The quality of education is highly variable, school conditions are often poor and nearly half a million girls who are enrolled do not regularly attend school. With support from Act for Peace, CWS â P/A aims to increase and strengthen girlsâ participation and their retention in education, and improve the quality of teaching and learning in primary schools in the Qarghayi district in Laghman province and Surkhrood district in Nangarhar province of Afghanistan.