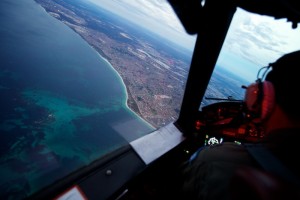 Crew on board an RAAF AP-3C Orion crossing the coast of Perth before landing at RAAF Pearce airbase in Perth, Western Australia having just completed an 11 hour search mission for missing Malaysia Airways Flight MH370.

The search is being conducted in an area 2,500km off the South West coast of Perth after the Malaysian Airways aircraft went missing on 8th March 2014 whilst on a flight between Kuala Lumpur and Beijing.
AAP Image/Richard Wainwright NO ARCHIVING