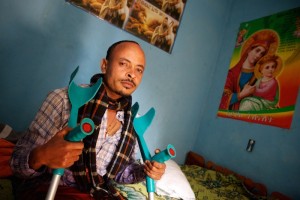 Birhana an Eritrean refugee in his room in Addia Ababa.

Birhana who is from Asmara in Eritrea was badly beaten up and tortured whilst conscripted into the Eritrean Army for not following orders to kill prisoners.

At first he refused to follow the conscription rules for joining the army but his mother was arrested so he had to join to get her released. He then spent 10 years in the army where he says life was very bad and they were constantly beaten and treated badly by the officers. One day he alleges he was assigned to look after prisoners in the army camp. They were Eritreans who were forcibly sent back from Malta after trying to seek asylum In Europe. He was then ordered with two other soldiers to take them out and shoot them. âWe couldnât do that and the prisoners escaped. The officers then tortured us and beat us so badly we couldnât walk. I managed to escape whilst in hospital though a smuggling network into Ethiopia where I spent 1.5 years in a refugee camp confined to a wheelchair (See supplied picture).â He was them medically referred to Addis through DICAC where he has received surgery on his badly broken legs and hips and physiotherapy and is now able to walk with crutches.

Act for Peace supports Development and Inter-Church Aid Commission (DICAC) in providing access to health services to refugees who have to be moved to Addis Ababa in order to deal with health concerns that cannot be adequately treated in the more rural refugee camps. The support provided includes assistance with medical expenses, emergency transport, supplementary dietary requirements and housing.