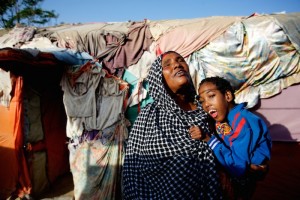 Zahra Ismail (47) with her son Hussein Mohammed (11) outside their shelter in Sheder refugee camp in eastern Ethiopia on the border of Somalia.

Zahra arrived in Sheder in March 2008 after fleeing Mogadishu when fighting erupted between Al-Shabab and government forces. Her husband was killed and she lost track of her two other children at night during the chaos and has been unable to find them since. She was also injured and lost sight in one eye.

She now tries to care for Hussein who has severe disabilities by herself and needs to be referred to the Urban Refugee program so they can receive the assistance and support that is needed. She said, ‘The older he gets the more difficult it is for me to manage by myself. I love my son and I want to go somewhere we can get better treatment and peace.’

There are more than 552 refugees with disabilities in the camp, many of whom receive insufficient medical care.

The camp is home to over 10,700 refugees and opened in 2008 following fighting in Somalia with Al-Shabab. There is only one doctor for all the refugees in the camp who often have complex medical issues from trauma wounds to physiological
conditions.

Act for Peace supports Development and Inter-Church Aid Commission (DICAC) in providing access to health services to refugees who have to be moved to Addis Ababa in order to deal with health concerns that cannot be adequately treated in the more rural refugee camps. The support provided includes assistance with medical expenses, emergency transport, supplementary dietary requirements and housing.