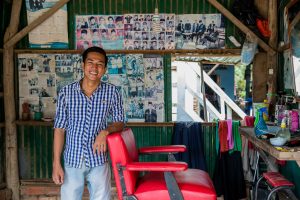 Rattanak inside his barber shop in Kandal province, Cambodia.