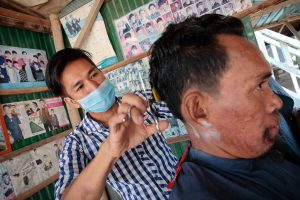 Rattanak cutting a clients hair in his barber shop which is located in front of his home in Kandal province, Cambodia.
Rattanak (28) is deaf and caught polio aged five, which has affected his mobility. He had an isolated childhood, unable to communicate with his family or community until being introduced to the Deaf Development Program (DDP), a Caritas Australia partner, based in Phnom Penh, the capital of Cambodia.