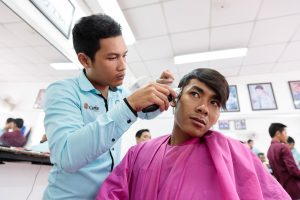 The trainees practice on each other and the general public can also walk in for a discounted hair cut.