Shirley, an indigenous Manide woman from the remote Camarines Norte province in the Philippines, has overcome discrimination, poverty and inequality to train as a Tribal Health Worker. She is now able to support her family, send her children to school and has become a leader in her community, standing up for their rights and better health outcomes.

Shirley was the lead story for the Caritas Australia Project Compassion 2020 campaign which launched earlier this year, just as coronavirus was starting to spread through the Philippines and the rest of the world. Her role as a Tribal Health Worker has now become even more crucial.

We spent a week with Shirley in her community, documenting her story in film and images, which were used in this year’s campaign. 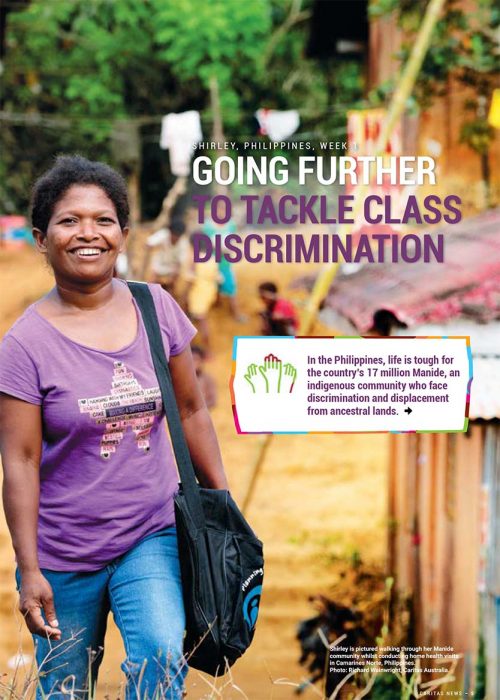 The approximately 17 million indigenous people in the Philippines are some of the most vulnerable in the nation, suffering discrimination, high rates of ill health and displacement from their ancestral lands.

Shirley, who is married and has two sons and two daughters, are members of the Manide people who were once a semi nomadic community. She now lives with 15 other Manide families in a new settled community alongside non-indigenous families, set up in 2006 with assistance from the Philippines government. 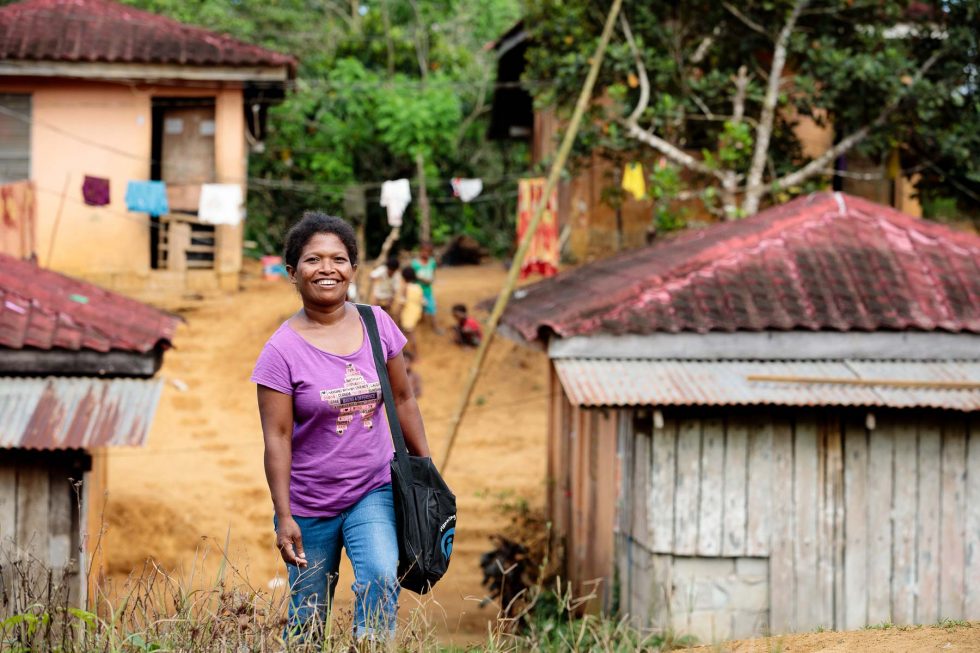 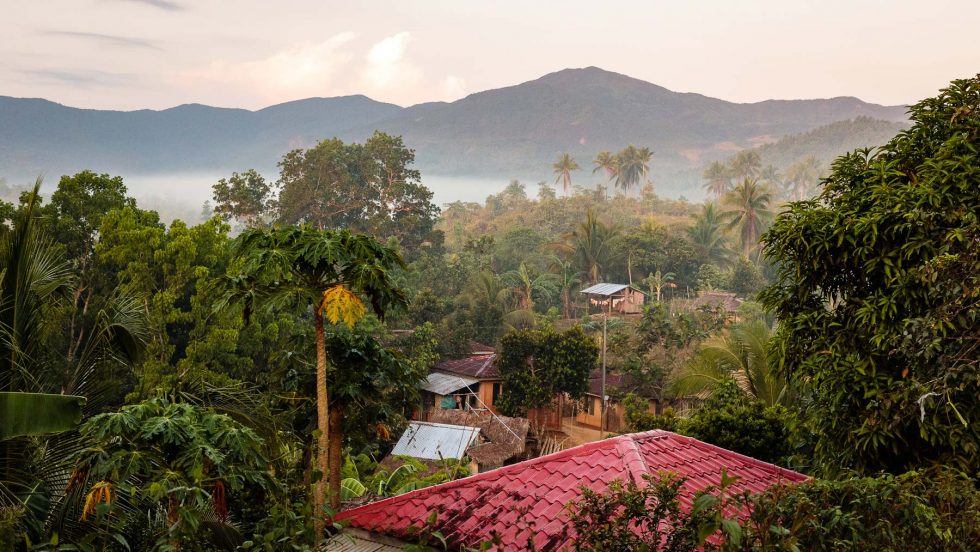 A general view of the Manide community where Shirley lives. 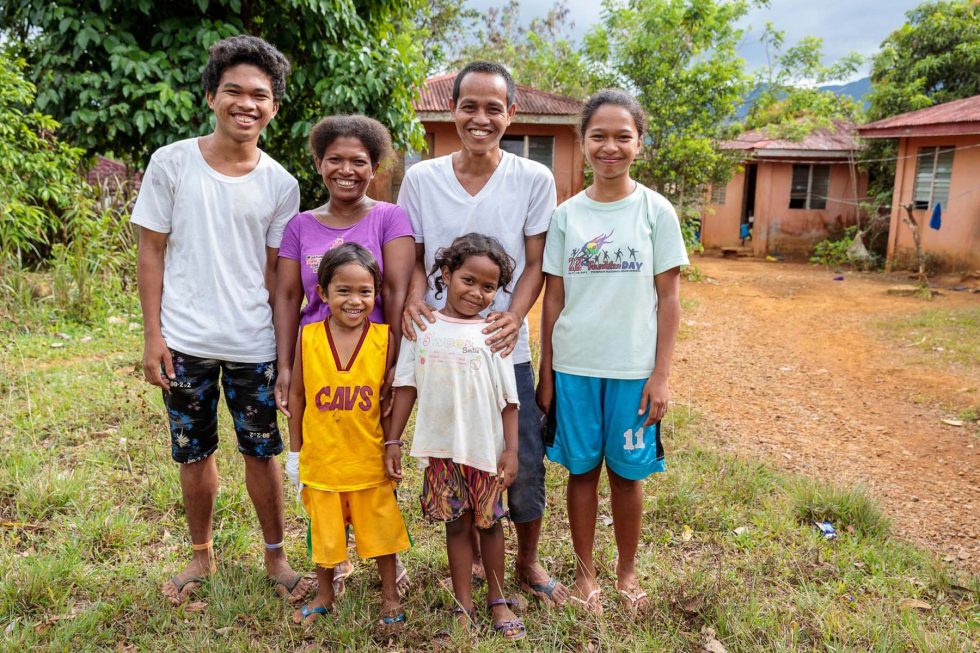 Shirley with her family, Reymark (16), husband Ernesto, Althea (14) and in front Angelo (5) and Angel (8) in their community in Camarines Norte. Shirley poses for a picture with members of her Manide community outside their Tribal Hall.

After meeting local Caritas Australia partner SPACFI, Shirley was encouraged to train as a Tribal Health Worker with the aim of becoming a much needed and trusted intermediary between her community and government health care services. Historically, the Manide had trouble accessing health care due to discrimination and their fear of mixing with non-indigenous people. 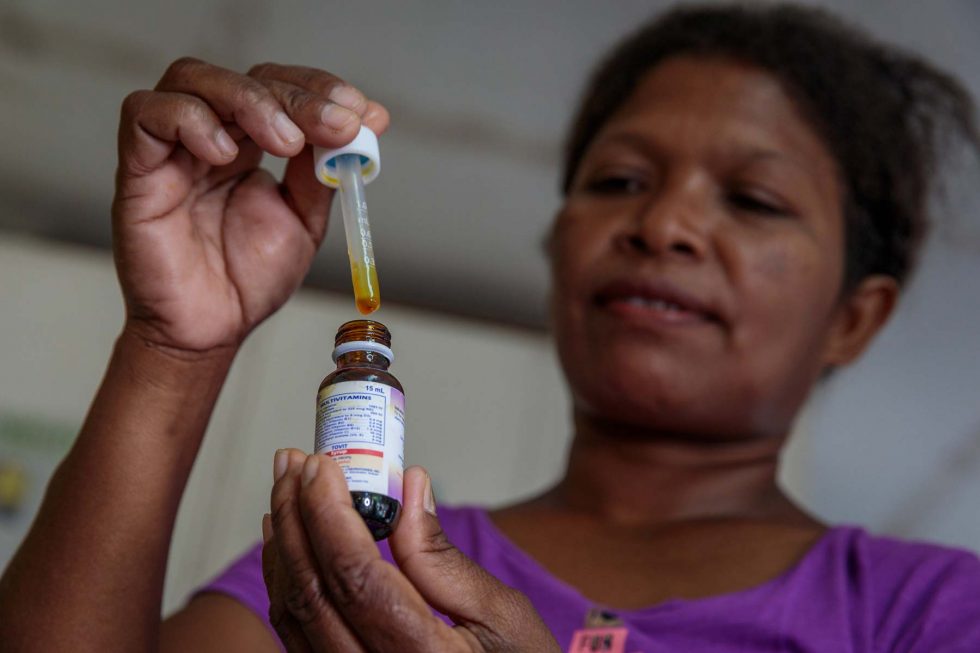 Shirley prepares multivitamins drops for a child at the local government health clinic near her Manide community.

Now qualified, Shirley works in the local government health clinic as well as conducting home visits within her community.

Shirley said, “When I became a health worker, my tribe gained the confidence to visit the health centre. I became the voice of my tribe to have their needs heard. As a trained health worker, I am confident to talk, to mingle with non-indigenous people, even with government employees.” 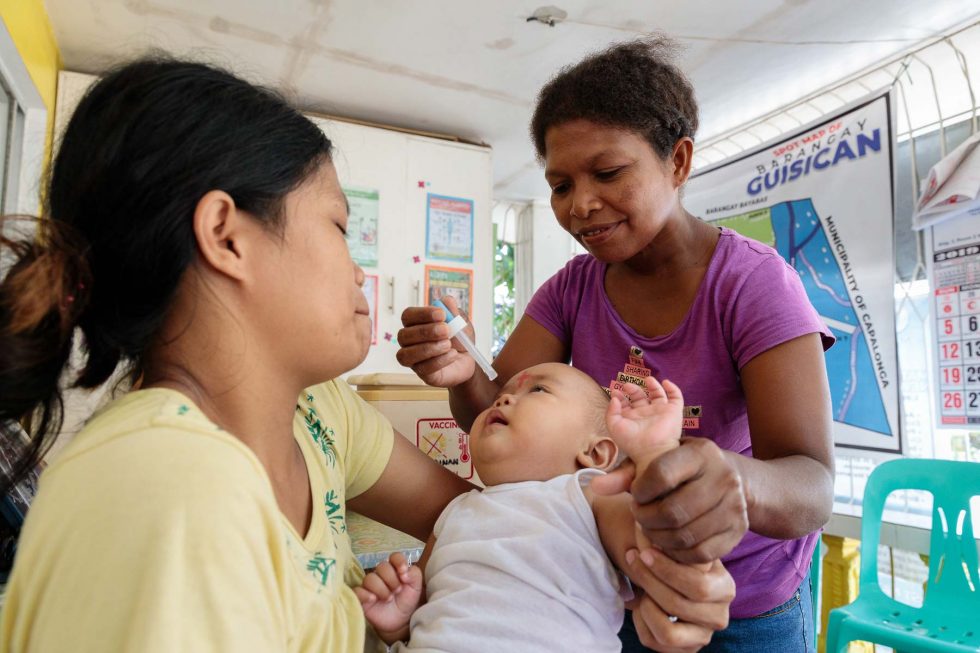 Shirley has been trained as a Tribal Health Worker and works in the local government run health clinic as well as conducting home visits within her community.

The aim of the SPACFI program is to help Manide people overcome any sense of inferiority brought about by the discrimination and marginalisation they have experienced. It has supported them in advocating for their land rights, getting better employment, and improving their access to health, education, housing and sanitation. 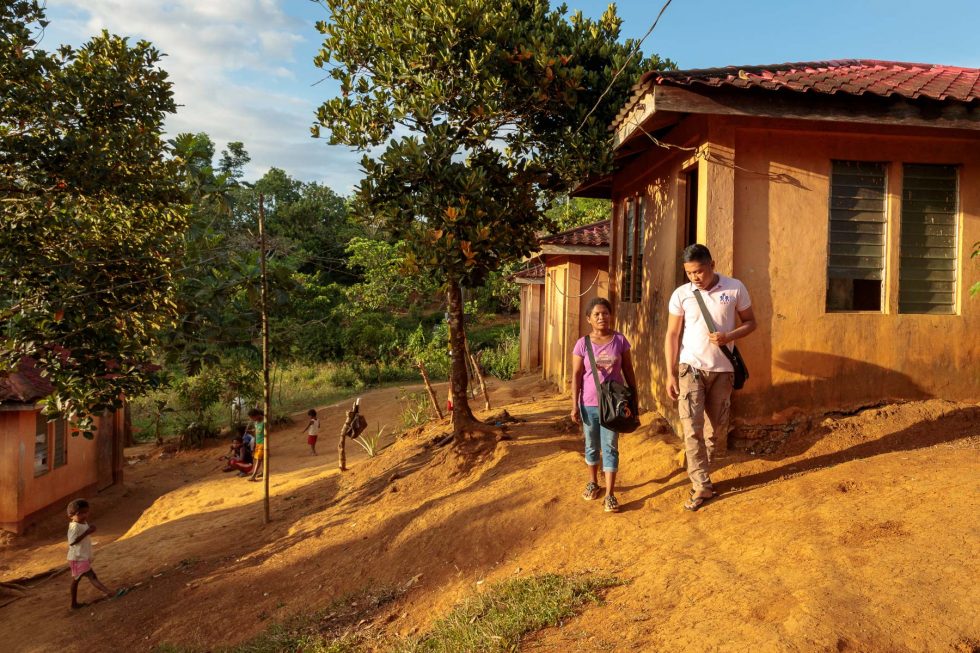 Shirley talks with Eric, a community organiser with SPACFI, whilst conducting home health visits in her Manide community. Shirley records the blood pressure of an elderly Manide community member as part of a home health visit in their community. 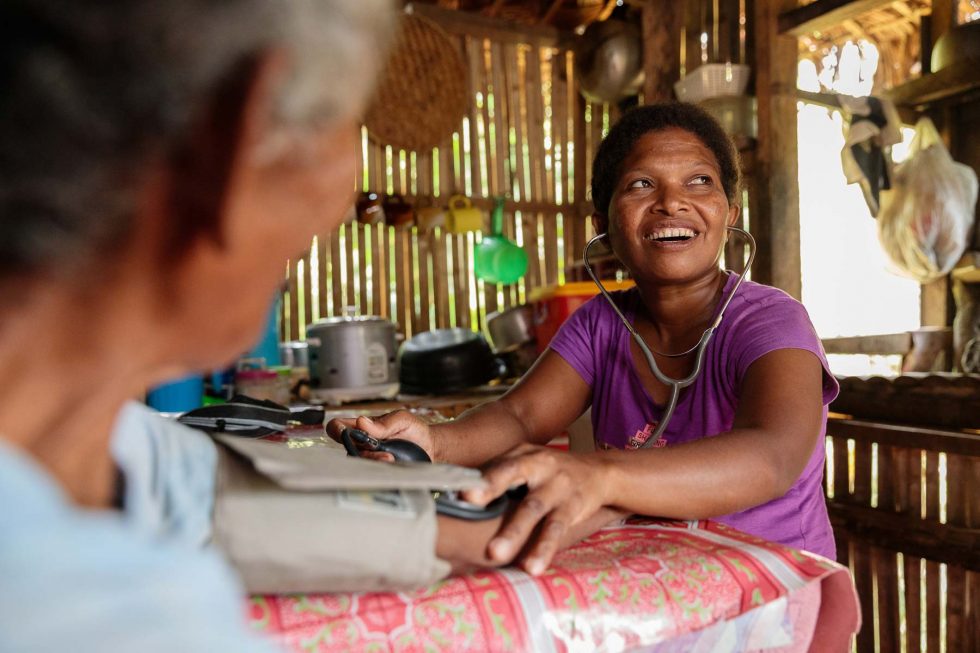 Through the program, Shirley has received training and workshops which has contributed to her awareness and rights as an indigenous person.

“To have Shirley as a representative for indigenous people gives courage to the community. The most significant change in this community is the affirmation of their right to be heard, right to education, right to participate in community activities.” 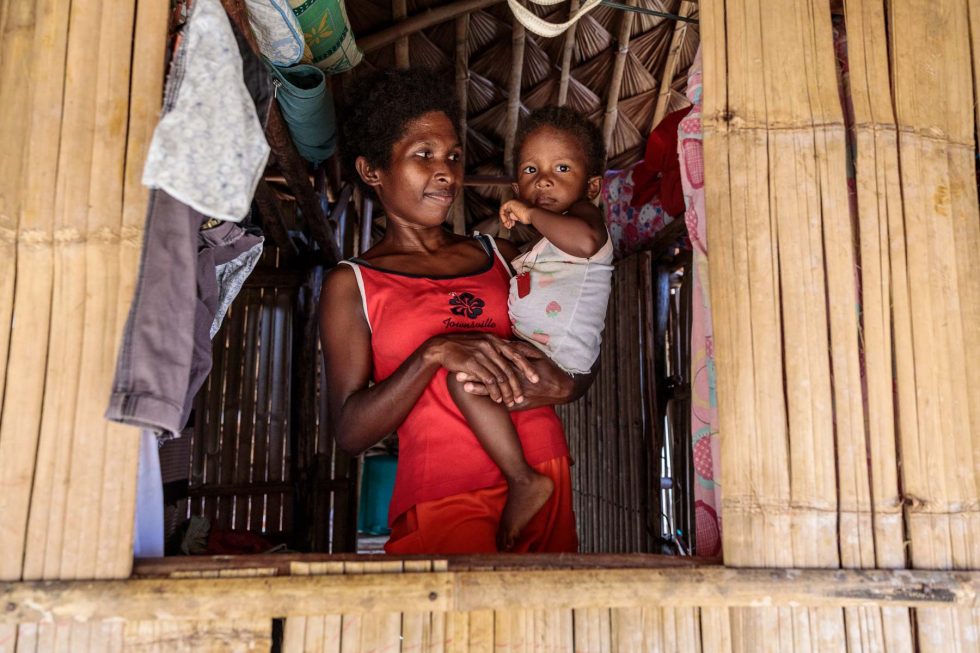 A mother and child from Shirley’s Manide community look out from their traditional hut. 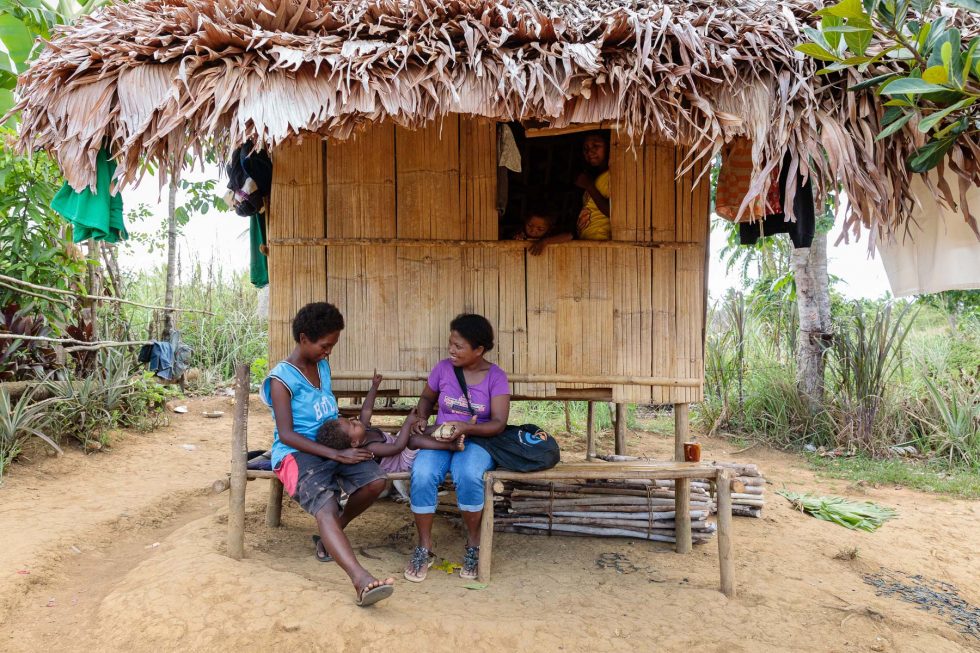 Shirley (right) talks with a mother and child sitting outside their traditional hut whilst conducting home health visits.

Since taking on the role, fewer children in Shirley’s community are now sick or malnourished and more are going to school due to greater acceptance of the Manide people.

Shirley said, “My job assists indigenous people to visit the health centre to get their kids vaccinated. We no longer have cases of severe diseases. “ 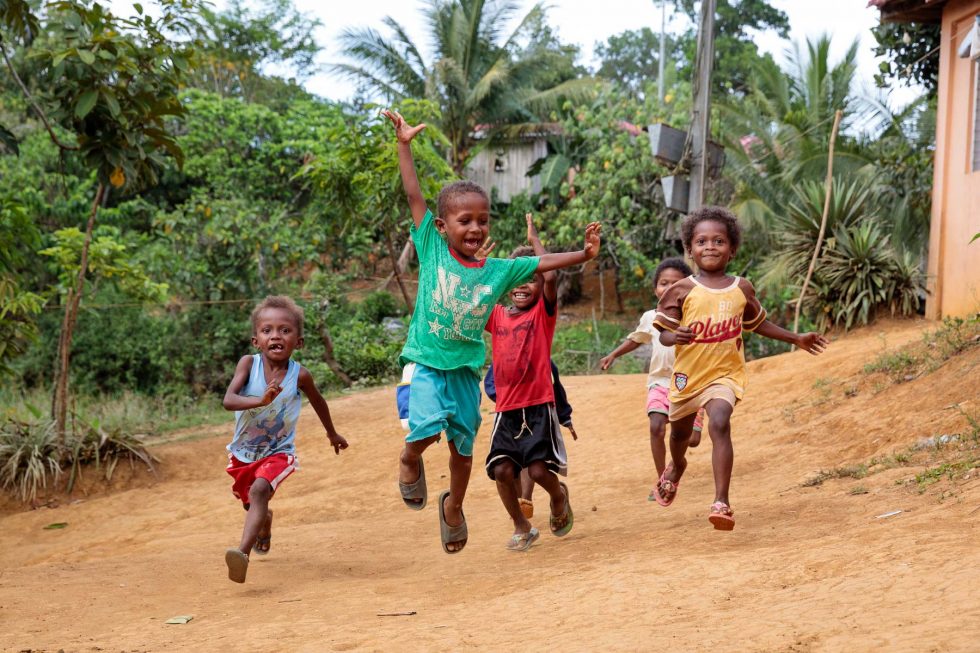 Manide children run through their community where Shirley lives. Since gaining access to medical care the children are now healthier.

Shirley herself has experienced many forms of discrimination. She recalled an occasion when a Jeepney driver insisted Shirley and other community members ride on top of the vehicle instead of inside. Shirley fought back, saying , “It’s too hot on the roof, why should I sit on the roof ?”. They stood their ground and explained to the driver they were all equal and wouldn’t follow his instructions but would wait for another Jeepney. The driver relented and they continued their journey inside. 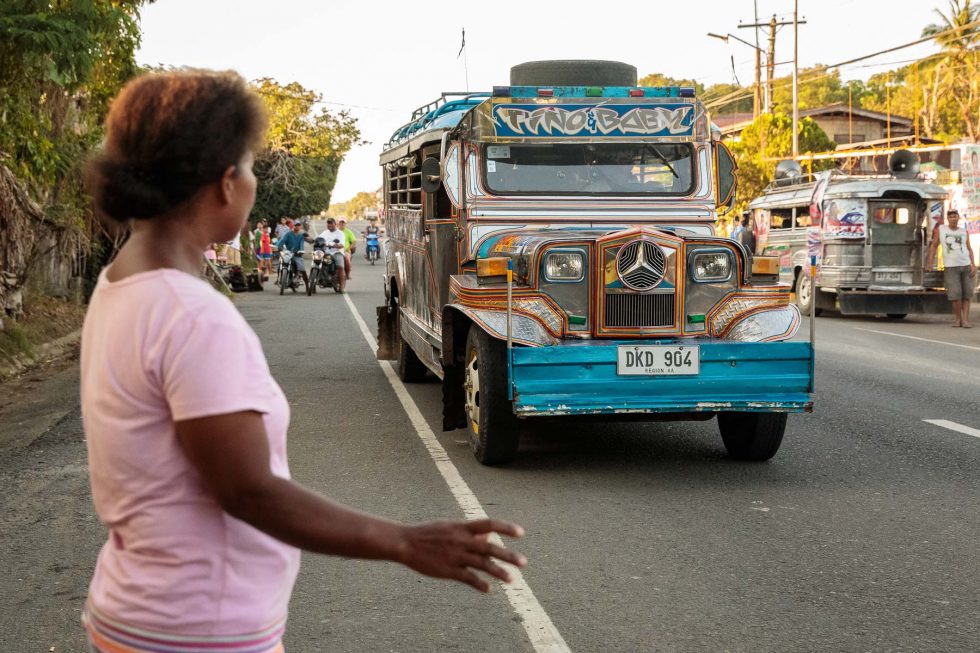 Shirley flags down a local Jeepney near to her home. She recalled an occasion when the driver insisted Shirley and other community members ride on top of the vehicle instead of inside. 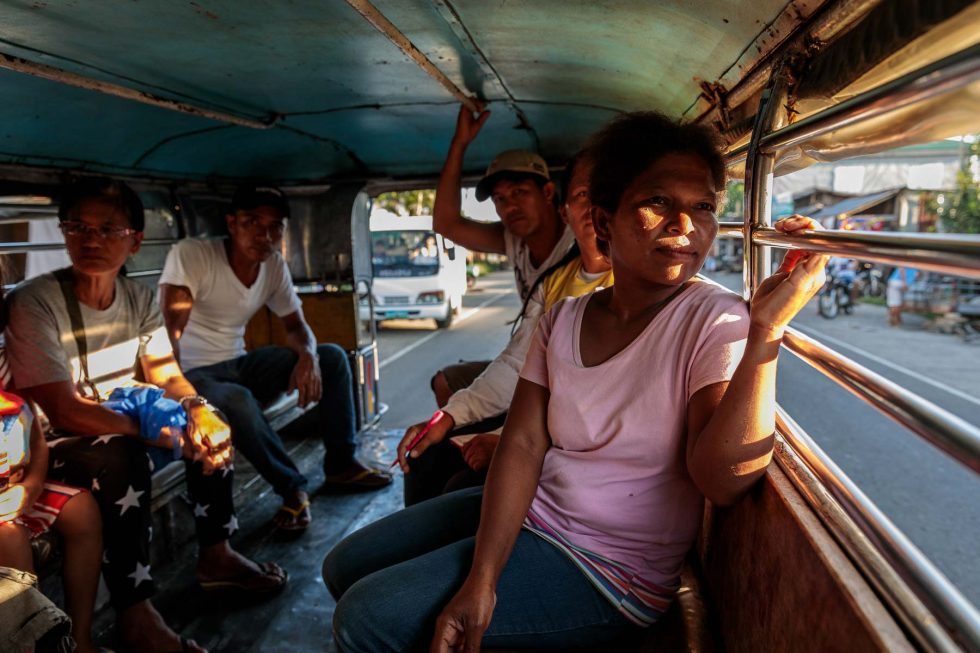 Shirley believes much of the discrimination comes from her tribe’s lack of education and feeling of inferiority. Most of the older generation of Manide people are illiterate due to their nomadic living and discrimination at school.

All of Shirley’s children now attend school, including her two youngest, Angel (8) and Angelo (5) who go to a nearby mixed indigenous and non-indigenous school. SPACFI helps all the Manide children with access to schooling by assisting with fees, uniforms and school supplies. 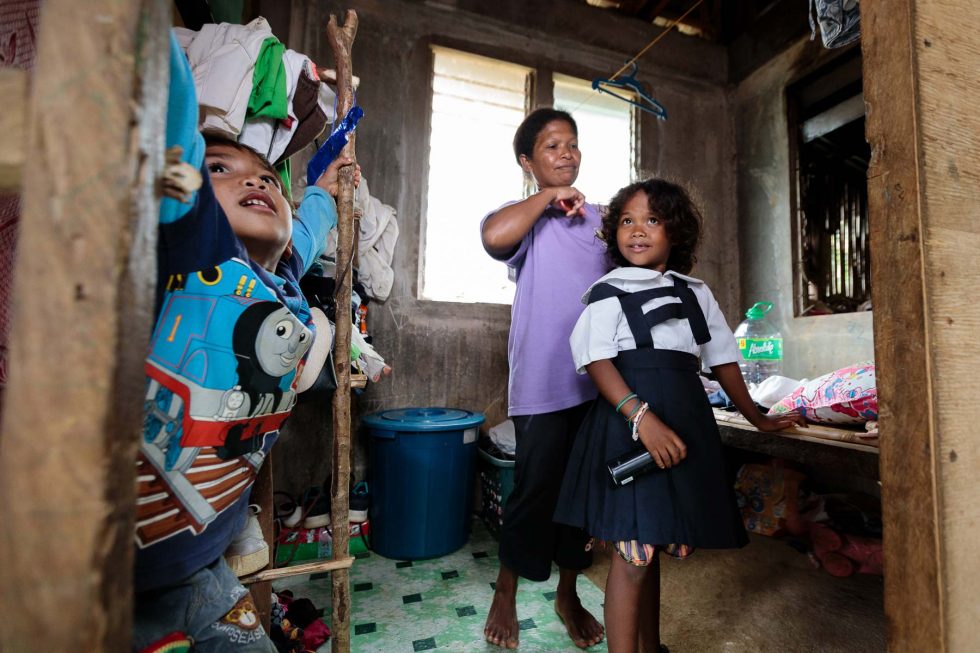 Shirley combs Angel’s hair at home as Angelo plays before leaving for the local school. 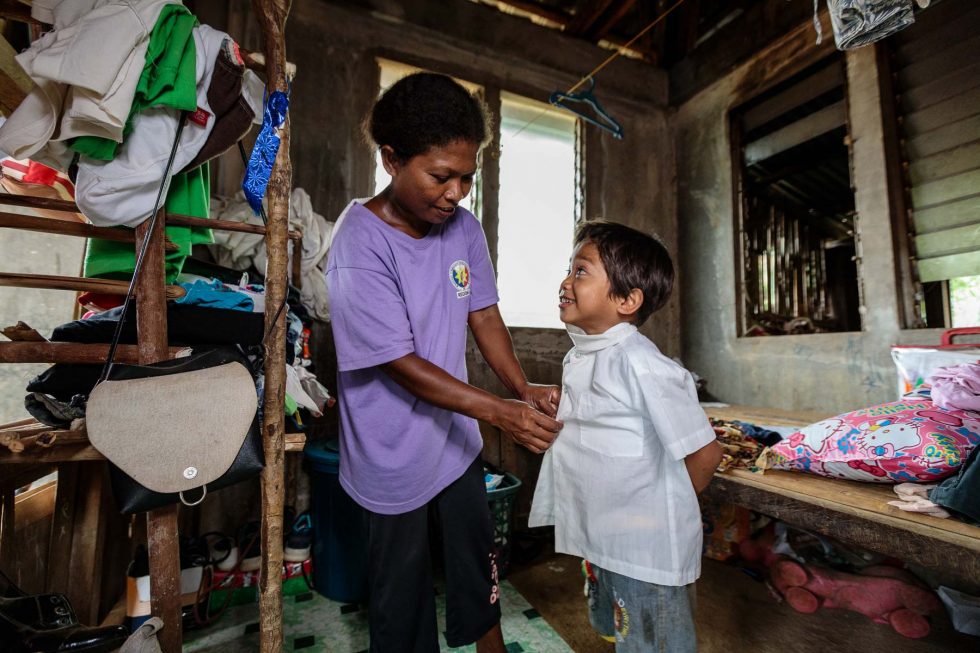 Shirley helps Angelo into his school uniform at home. Most of the older generation of Manide people are illiterate due to their nomadic living and discrimination.

Poorly educated herself while growing up, Shirley had to survive collecting materials in the forests to make slippers out of dried banana bark to then sell. Understanding the importance of education in breaking the cycle of poverty and discrimination, Shirley said,

“My dream is to be able to provide for my kids and have them finish their studies. Finishing school is important to end bullying of indigenous people.” 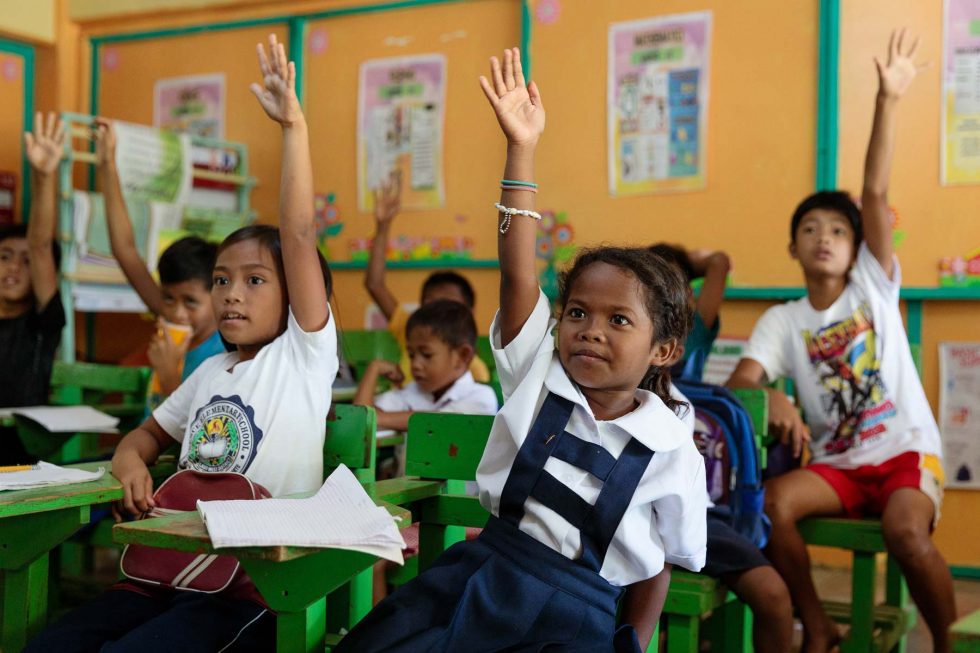 Shirley’s children attend school with the help of SPACFI who assist with fees, uniforms and school supplies. 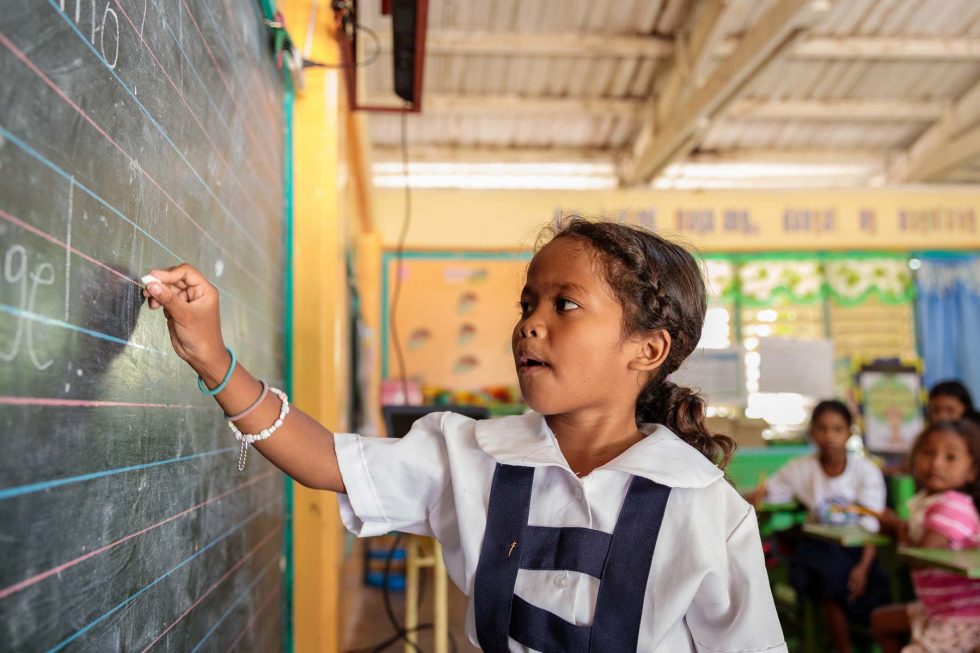 Angel (8), youngest daughter of Shirley, is seen during lessons at her local school close to her Manide community. The school is a mixed indigenous and non-indigenous school.

Shirley also recently took over her father’s role as tribal chieftain and now represents her people on her local health board. As a community leader, she helps Manide people to access medicine, vaccines, healthcare and nutritional advice. Shirley is the tribal leader of her community, a position passed down from her father. Shirley and her community are part of the Caritas Australia funded project run by local partner SPACFI. It helps strengthen their capacities to advocate for their rights over their ancestral lands, securing cultural conservation and integrity. 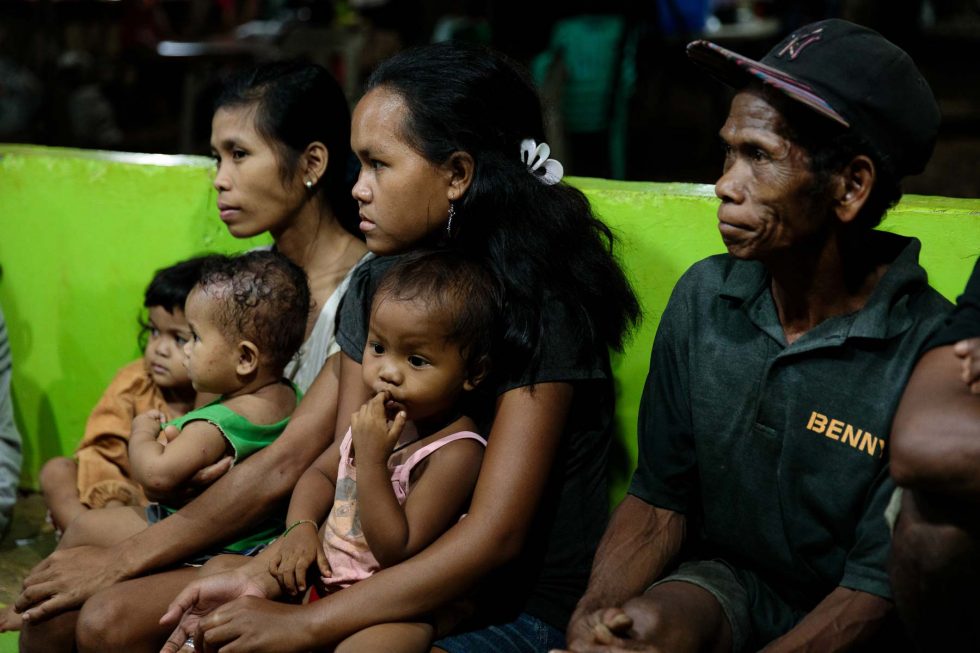 Manide community members listen as Shirley leads a discussion next to the Tribal Hall. 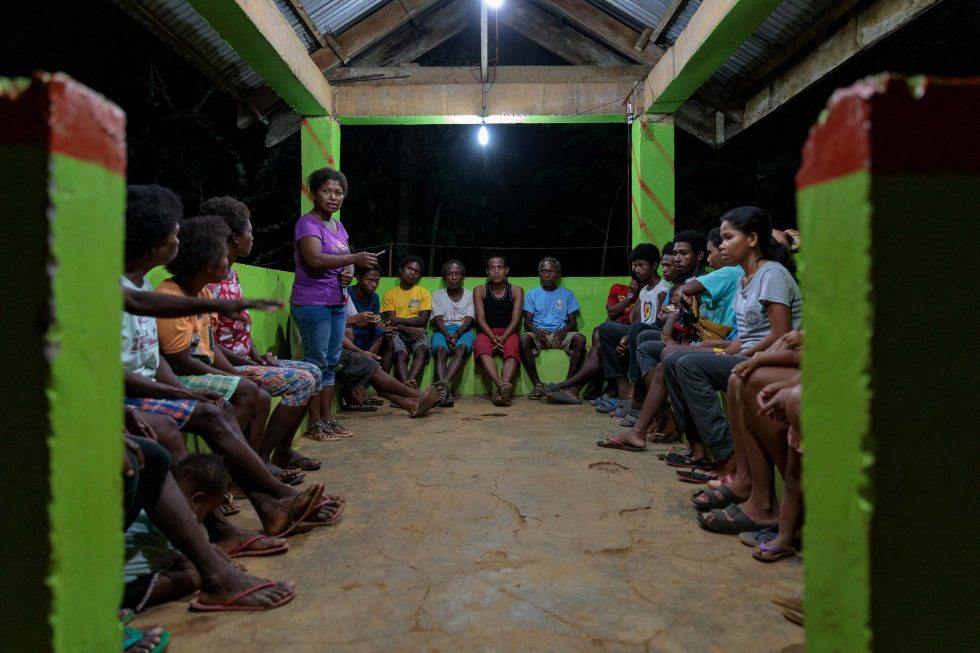 Shirley said, : There are good things that happened here in our tribe. Our kids are healthier, I’m proud of what I’ve done for my tribe.”