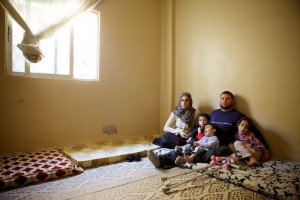 Zahy Al Melhim (31) with his wife Nisreen Metleg (31) and their children Kenan (6), Lilyan (7) & Yousef (1.7 mnths) sheltering in a small apartment in Russeifa, 15km NW of of the capital Amman, Jordan having fled their home in Babr Amr, a district of Homs, a town north of the Syrian capital Damascus.

Zahy, a blacksmith by trade, and his family fled Babr Amr after their home was destroyed by bombing and fighting. Zahy was injured by shrapnel whilst looking for food and was then shot 3 times in the same leg by snipers shortly. They once led a comfortable life with a good business, car and house. They left with nothing and now try and survive in Jordan.