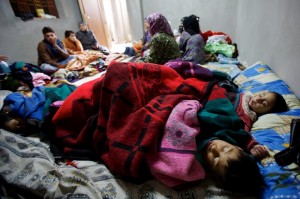 Layla (6) Fadi (5) sleeping surrounded by their relatives and other families.

Many households have lost their husbands in the fighting like these four families totalling 17 people, mostly youngsters, who now live together out of economic necessity and safety in this single room in East Amman, which only has one light, no heating, carpets or running water.

They fled the southern Syrian city of Daara after their houses were destroyed and their husbands killed in the fighting.