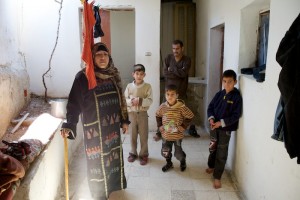 Muna Ahmed (40) with her sons, L-R Fadi (7 in beige top), Ala (25), Basheer (5 strippy top & Hussien (6 blue top) in a small apartment in Russeifa, 15km NW of of the capital Amman, Jordan. They fled their home town of Daara in southern Syria 3 months ago after their house was bombed.

Like many other families, they left Syria with nothing and are struggling to survive. They cannot afford the rent and have just a few blankets and pillows to sleep on.

Her husband Heitham, (not in picture) used to be a green grocer but was shot in the legs and cannot work. Ala was taken by the Syrian army for 4 months and tortured. He was eventually dumped back outside his family home. He used to work in a factory making drapes but is now severely traumatised and unable to communicate or work. He hasn’t spoken since he returned and wakes up screaming and hits his head.

The family are supported by Act for Peace partners Department of Service to Palestinian Refugees (DSPR) and their neighbours who have given them blankets and some food aid.