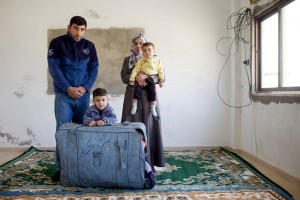 Alaâa (29), Zeena (26), Ammer (4) & Mohammed (1) fled Homs a month ago and are now living in this single room in Amman. Like all other refugees they only managed to bring what they could carry over the border, so they arrived with just some baby food, nappies and their clothes in this suitcase and are now struggling to survive.

They had a family bakery business making bread and sweets back in Homs but they were forced to flee after the bakery and their house were destroyed. They also didn’t feel safe due to an increase in kidnappings.