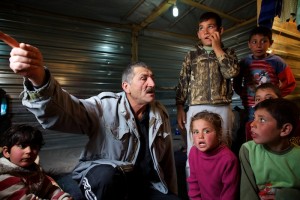 Abdullah (51) from the southern Syrian city of Daara with his family in a shelter in Zaatari refugee camp in northern Jordan where he lives with 14 members of his family. They have been here for over a year . He said, ‘My house was bombed and we left Syria with only the clothes we are wearing now. We just want the president to go away so we can go back to farming in Daara. I have two sons fighting with the FSA. I was jailed for 1 month and 10 days and was beaten. They burnt my car and destroyed my house.