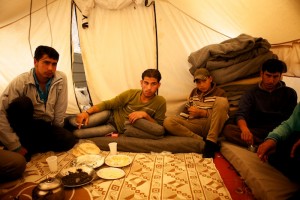 Young friends from the southern Syrian city of Daara eat together in a tent in Zaatari refugee camp. They all left at different times but have now rejoined together in the camp. ‘We have come here to secure our families and then we will go back to Syria to fight and kill. I swore I would return to fight.’