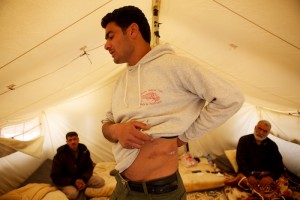 Abrahim Ali Baradan (23) from the southern Syrian city of Daara who arrived in Zaatari refugee camp 35 days ago to receive medical treatment to shrapnel wounds to his body and head. Behind to the right is his father Ali (55) who is also injured. They both claim to be fighters in the Attl Al Sunna rebel group and both have been arrested and imprisoned by the Syrian government and suffered torture during their incarceration. Abrahim was imprisoned for 7 months and his father for 5 months. They both are waiting to recover and want to get back to Syria to continue fighting. Ali said, ‘We are going to take down the President. I just want to be well enough to fight again.’