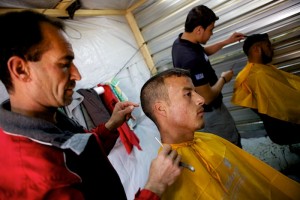 L-R Yacoub (38) & Hammad (26) from the southern Syrian city of Daara were hairdressers back home before having to flee 5 months ago. They charges JD1 ($0.78) for a haircut. Yacoub said ‘I like working as I now do not have to ask for help and can support my family.’ Small businesses have sprung up all along the main roads in Zaatari refugee camp selling all kinds of products and services