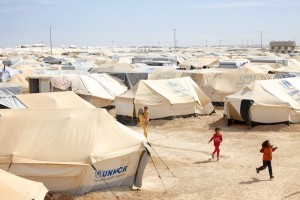 Children run between between tents in Zaatari refugee camp in northern Jordan close to the border of Syria which is hosting over 150,000 refugees from Syria and is fast becoming one of the largest refugee camps in the world.