In March this year when on assignment in Jordan for aid agency Act for Peace there was much press coverage on the millionth refugee to have fled Syria. Less than six months on the deplorable milestone of two million refugees has now hit the headlines.

The devastating impact on everyday Syrians can be seen most visually in the harsh desert refugee camp of Za’atari. Now hosting up to 120,000 people, it’s the second biggest refugee camp in the world and within just two years it’s become the fourth biggest centre of population in Jordan. 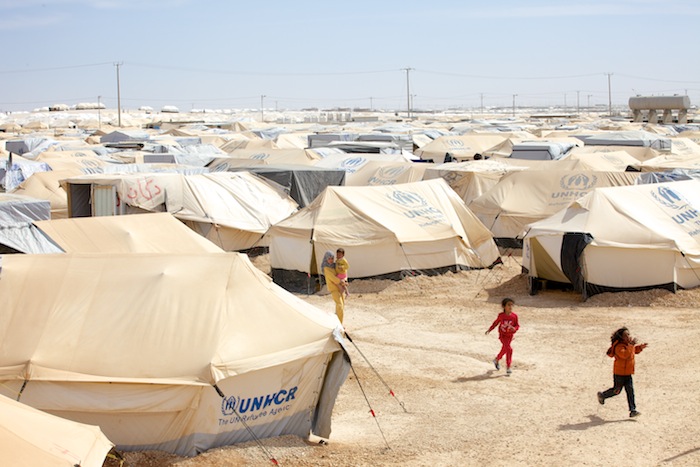 Children run between between tents in Za'atari refugee camp in northern Jordan close to the border of Syria. It's fast becoming one of the largest refugee camps in the world. 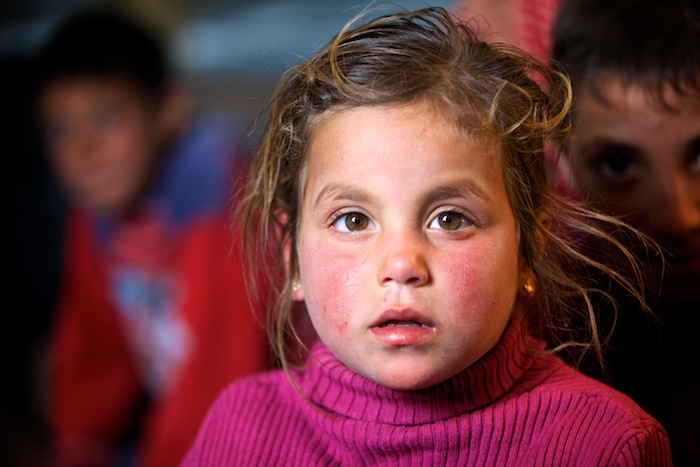 A young girl inside her tent in Za'atari refugee camp. Women and children make up over half the population of the camp.

Conditions in the camp are brutal. In the summer temperatures soar over 40c and in winter the nights are freezing. An interminable wind whips up a clingy white dust that results in chronic respiratory and eye conditions.Millions of litres of water have to be trucked in everyday and bread and other essentials are often in short supply, leading to regular riots. Whole extended families sleep together in row upon row of tents with privacy non-existent. Boredom and fear of the future has replaced a life they have left behind. 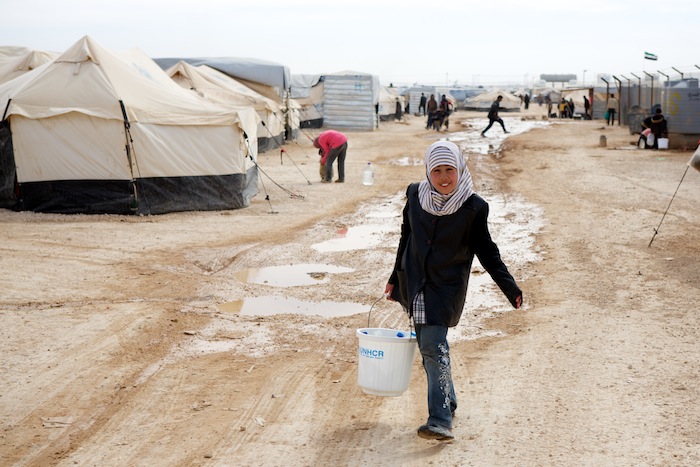 A young girl carries filled water bottles collected from a water storage tank in Za'atari refugee camp. One of the biggest issues in the camp is the availability of fresh clean drinking water. 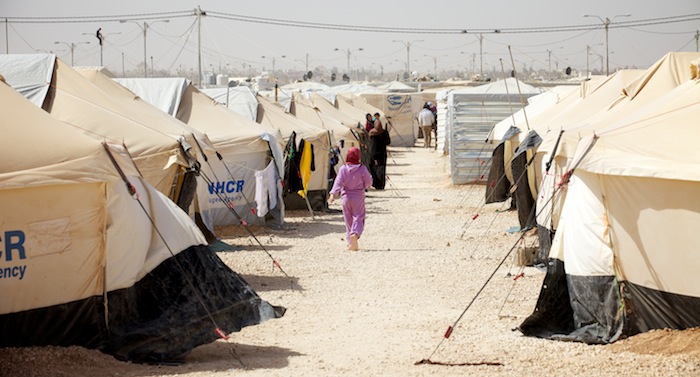 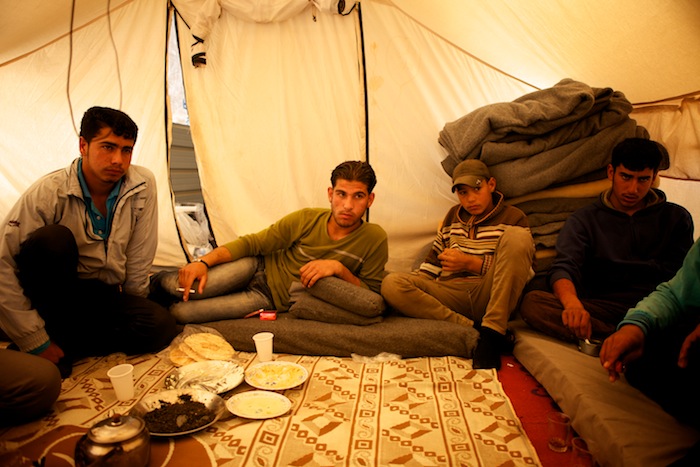 Young friends from the southern Syrian city of Daara eat together in a tent in Za'atari refugee camp. They all left at different times but have now rejoined together in the camp. 'We have come here to secure our families and then we will go back to Syria to fight and kill. I swore I would return to fight.'

Aid agencies like Act for Peace and UNHCR are doing their best to provide the basics such as shelter, food, water and medical support but with a shortfall of funding and thousands of people arriving everyday, trying to meet their needs is extremely challenging.

Filling in the gaps are entrepreneurs who line the main street selling goods and services from ice creams, to electric fans to haircuts, all of which is encouraged by the camp management to help create a sense of ownership and community. 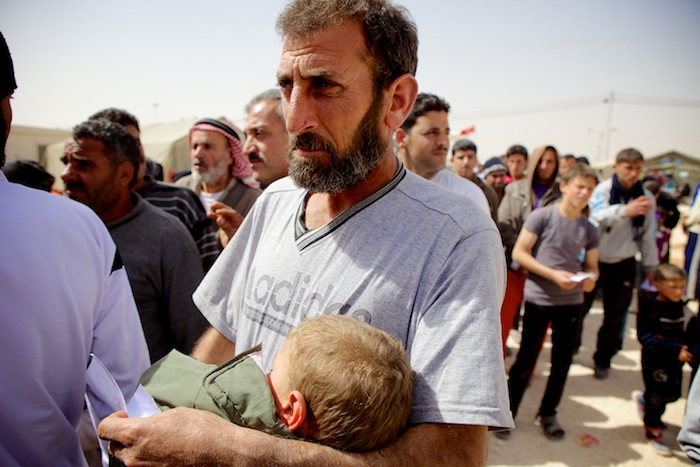 A Syrian refugee waits in line with his sick son at a crowded medical centre run by the Moroccan Army in Za'atari refugee camp. 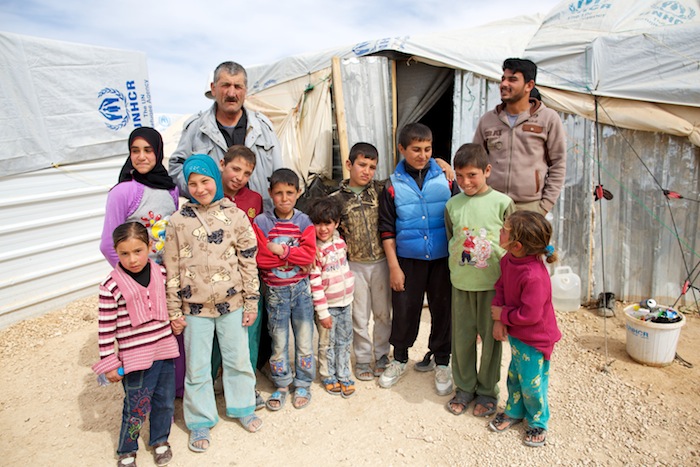 Abdullah (51) (back left) from the southern Syrian city of Daara with his family in a shelter in Za'atari refugee camp where he lives with 14 members of his family. They have been here for over a year . He said, 'My house was bombed and we left Syria with only the clothes we are wearing now. We just want the President to go away so we can go back to farming in Daara. I have two sons fighting with the FSA. I was jailed for 1 month and 10 days and was beaten. They burnt my car and destroyed my house.' 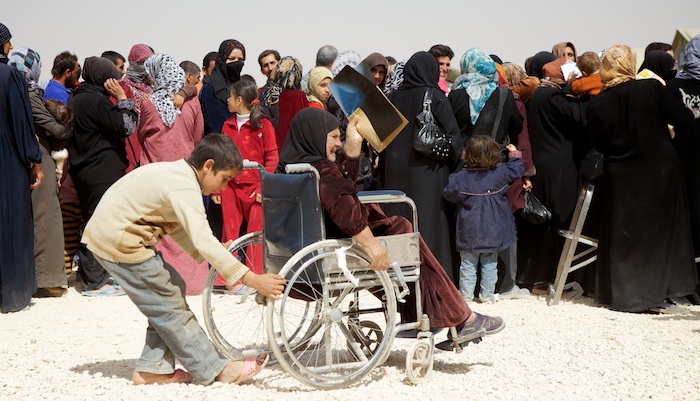 A young boy pushes his sick mother across rocky ground at a crowded medical centre run by the Moroccan Army in Za'atari refugee camp. 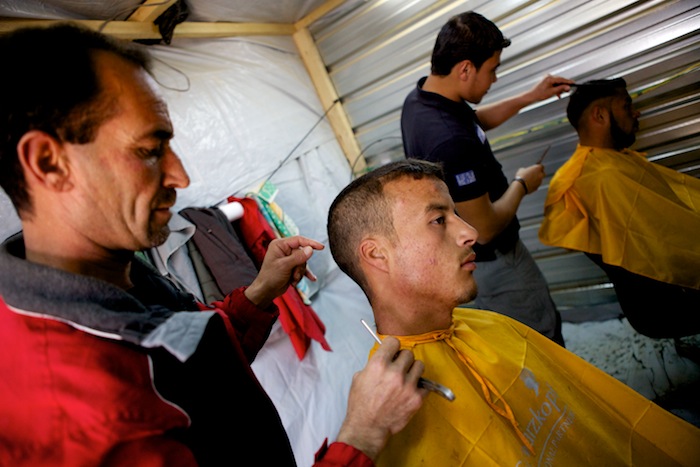 Yacoub (38) & Hammad (26) from the southern Syrian city of Daara were hairdressers back home before having to flee 5 months ago. They charges JD1 ($0.78) for a haircut. Yacoub said 'I like working as I now do not have to ask for help and can support my family.'

What shocked me the most is the lack of law and order in the camp. There are Jordanian police on the gates and patrolling the perimeter but this is a closed camp so leaving requires special permission, bribery or the occasional good will of the gatekeepers. Police rarely venture into the camp itself and when they do it‘s often in riot gear and armoured vehicles. You get all the social problems of criminality and gender based violence you’d get in any big city but this is exacerbated by the containment and hopelessness of the situation. 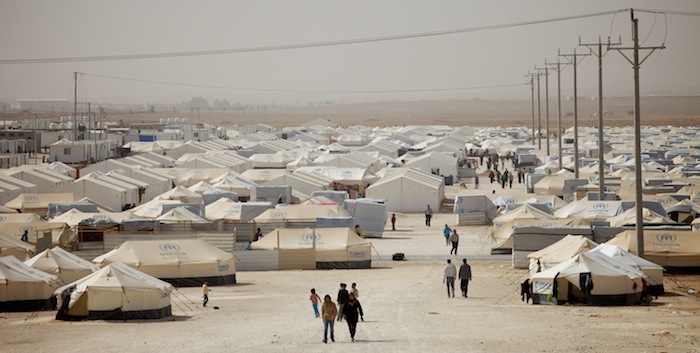 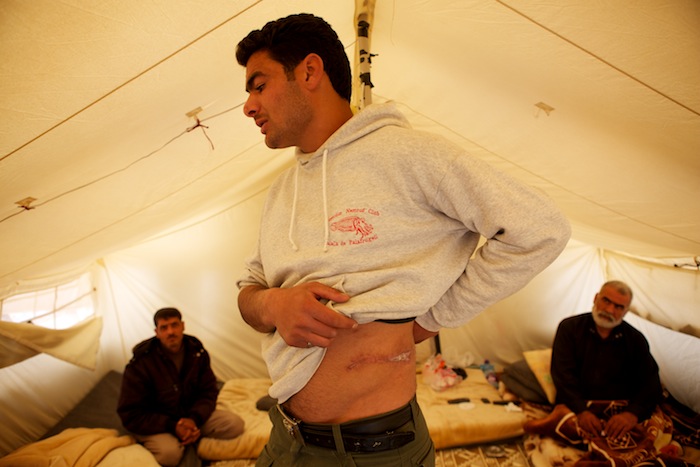 Abrahim (23) from the southern Syrian city of Daara who arrived in Za'atari refugee camp to receive medical treatment for shrapnel wounds to his body and head. Abrahim was imprisoned for 7 months and his father for 5 months. They both are waiting to recover and want to get back to Syria to continue fighting. He said, 'We are going to take down the President. I just want to be well enough to fight again.'

Working as a photographer and shooting video in this environment certainly has its challenges. Out of all the refugee camps I’ve worked in over the years, Za’atari is one of the most chaotic and confrontational I’ve been to. There’s an underlying air of tension as people try and eke out whatever existence they can. If you drive, your vehicle is usually stoned. If you walk, an angry group often mobs you, venting their frustrations and asking for assistance.

Then you have the children, scarred by unimaginable experiences, who express their frustrations and confusion through violent actions. Zaher, a Jordanian who works with a partner agency and I had just finished interviewing a family and were about to leave when a group of children came up to us asking for pictures. One young boy alternated between being very happy and smiling then quickly becoming very aggressive and back again. Sensing that the situation was escalating with more people crowding around us and quickly becoming out of control we decided to leave. As stones started being thrown at us, we walked towards the main road. Now surrounded by an angry crowd, Zaher started translating some of what was being said, none of which was encouraging. Then some random guy saunters up to us, chatting away in English, asking where we were from as if nothing was happening. This seemed to have a calming effect on everyone as the crowd disappeared as quickly as it had formed.

It was a tragic example of how children are bearing the brunt of this conflict, their erratic behavior a symptom of the trauma they have experienced and the insecurity of their current existence. 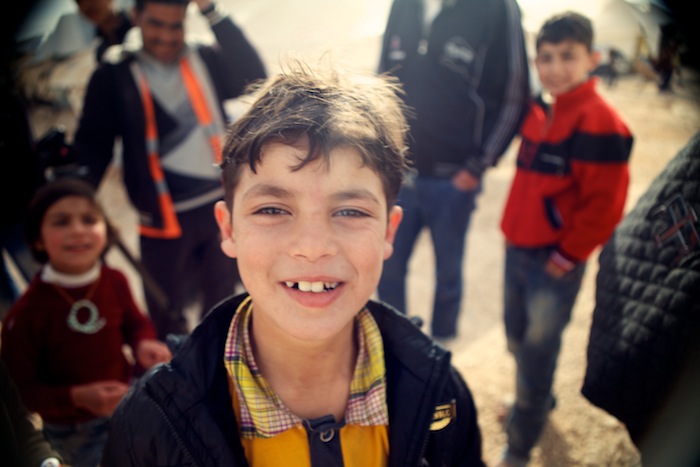 Many children are traumatised by what they have seen.

The UN estimates that of all the refugees, one million of them are children, with most being under the age of 11.

This is why, along with supplying hygiene kits and blankets and food parcels, Act for Peace and their partners are supplying school uniforms so children can attend the UNICEF run school in the camp. The uniforms not only enable them to continue their education but they also bring some sense of normality to what is a chaotic and frightening time.

One of those students I met was 16 year old Hana, a very energetic and bright girl who had to flee her town of Daara in the south of Syria. She was telling me about how her home was destroyed by artillery during fighting and members of her family were kidnapped and tortured. Like most refugees, she had an incredibly dangerous and traumatic journey to reach safety in Jordan.

For the past year she has been living in this tent in Zaatari camp with her mum and dad, 4 brothers and two sisters with no hope of returning anytime soon.

Hana wants to become a doctor and she told me ‘We all go to school even with the difficulties that we suffered here. What makes me stronger to study is so I can return to my country and build it for the future.’ 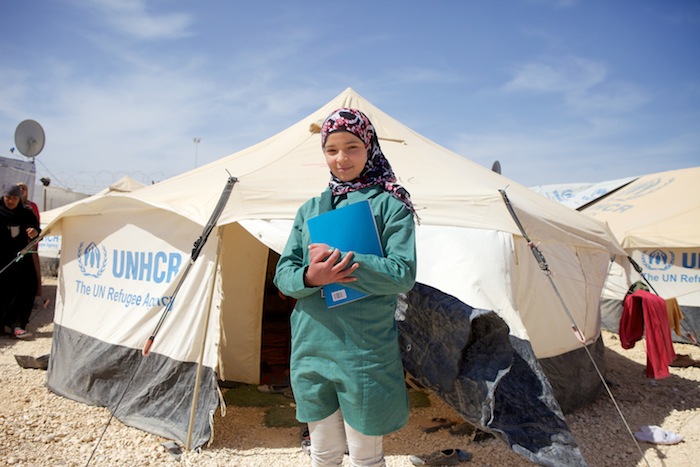 Hana (16), who fled her home town of Daara in southern Syria after her house was bombed and some of her relatives tortured, standing outside a tent in Za'atari refugee camp in northern Jordan where she lives with her family of mother and father, 4 sisters and 2 brothers.

Education is a long term peace building strategy and UNICEF warns that there is fast becoming a “lost generation” of child refugees ill-equipped to help rebuild Syria in the future. So when the fighting stops, Syria will face huge challengers to rebuild itself so an educated younger generation like Hana will be essential to enable that to happen.

For further information or to make a donation to the appeal please visit the Act for Peace website here. 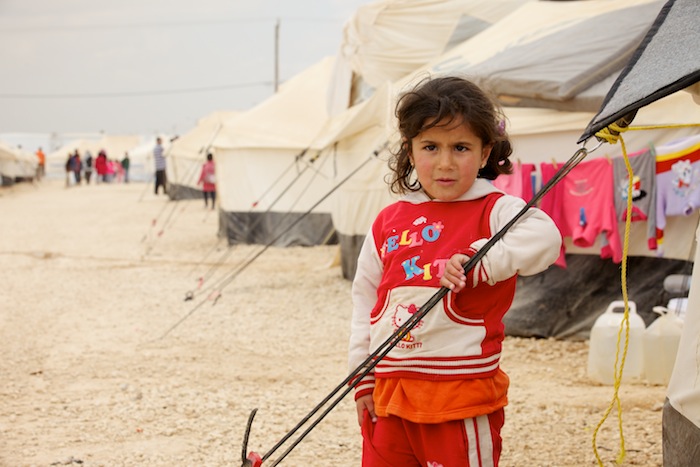 A young girl outside her tent in Za'atari refugee camp in northern Jordan close to the border of Syria.