Last year I made my first visit to PNG, a country that has always been on my must go to list. A quick night stop in Port Moresby, an internal flight to Mt Hagen then a two hour drive up into the hills saw me arrive in the community of Grisa, located in the Banz area of Jiwarka province.

I was there to meet Dominic, a community member from Grisa and Sister Regina, who have been running a project called Community Conversations since 2007. The aim of the program is to help create safe spaces, facilitated by trained community members, so everyone in the community can discuss the key issues they face, such as violence, HIV or other issues they have identified.

Dominic was one of the first volunteers on the program. Through the training, he learnt communication and problem-solving skills that helped him lead open, respectful community discussions in his village.

These stills and video were shot on assignment for Caritas Australia as part of their Project Compassion 2016 appeal. 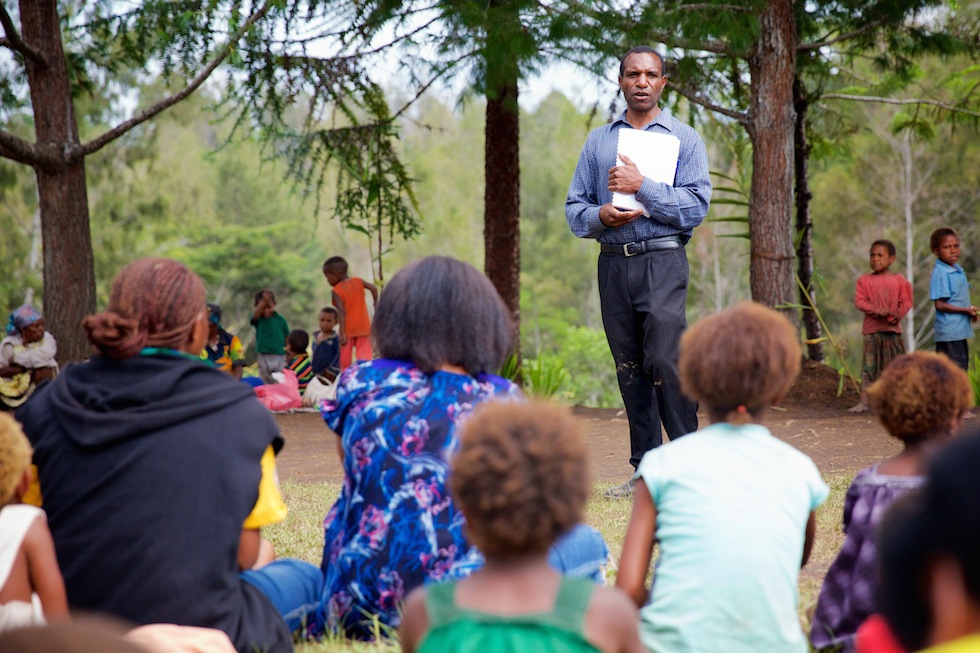 Dominic facilitating a Community Conversation session in his home village of Grisa in the Banz area of Jiwarka Province, Papua New Guinea. 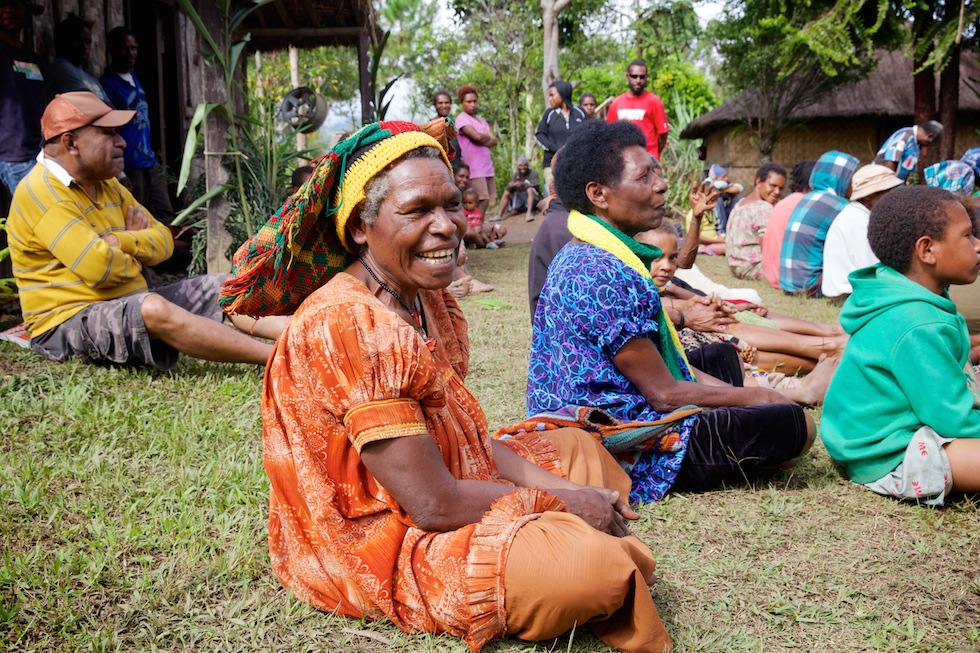 A lady laughing during a role play put on by Dominic and other facilitators during a Community Conversations session in the village of Grisa. 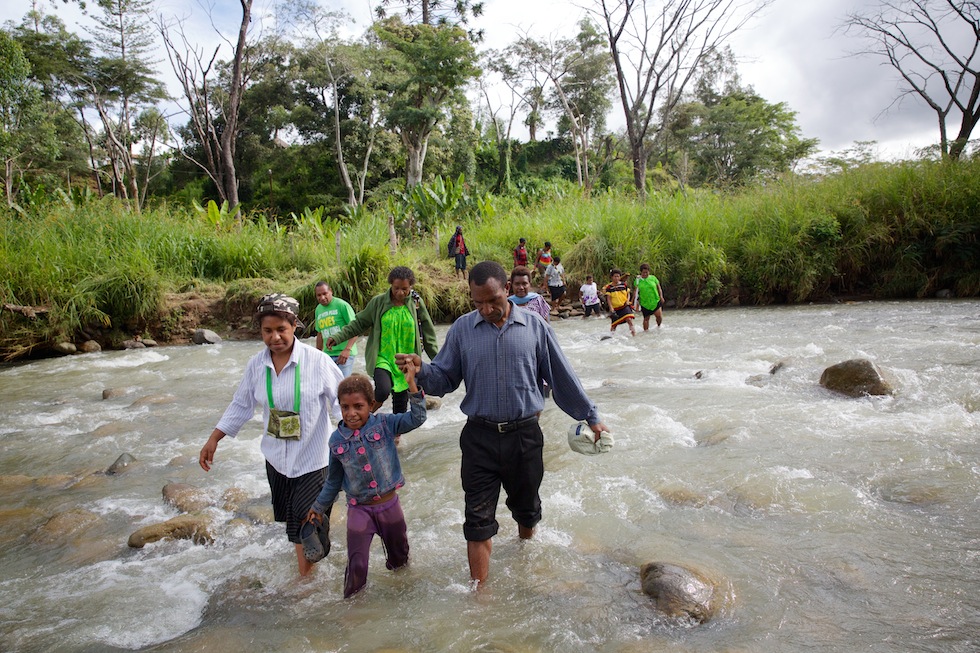 Dominic with students and facilitators wade across the Mobal river which separates his home village of Grisa and the Sisters of Notre Dame where the Community Conversations workshops are held.

Grisa was the first village to participate in the Community Conversations program and since starting they have seen many positive changes such as reduction in domestic violence and better gender equality.

“Now everyone, women and young people, have a voice and peace is maintained that way.” – Dominic. 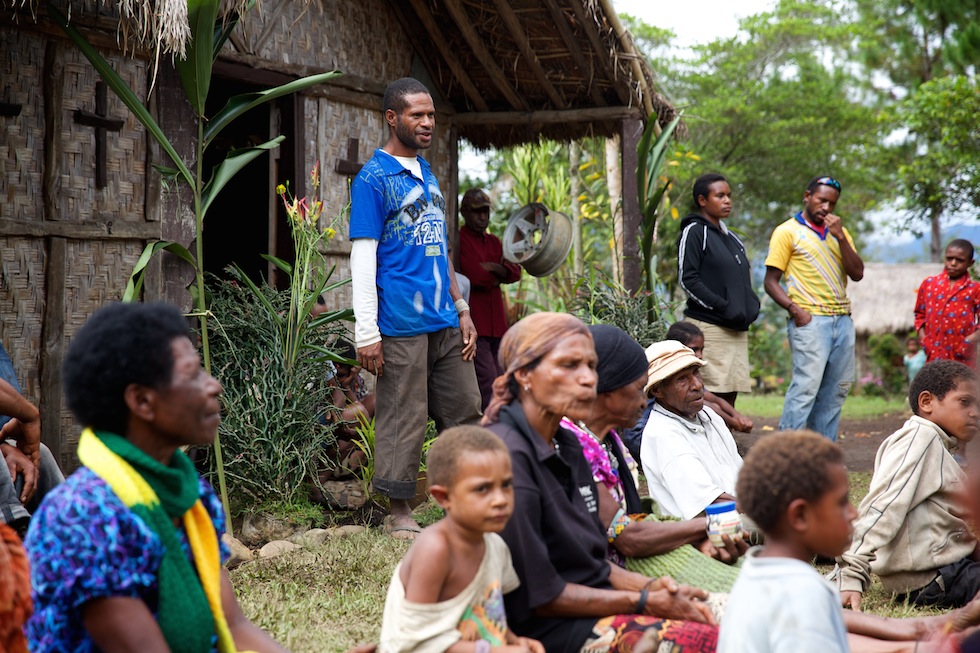 John Kaa a community member of Grisa village making comments about the role play he had just watched about gender inequality during a community conversations session. 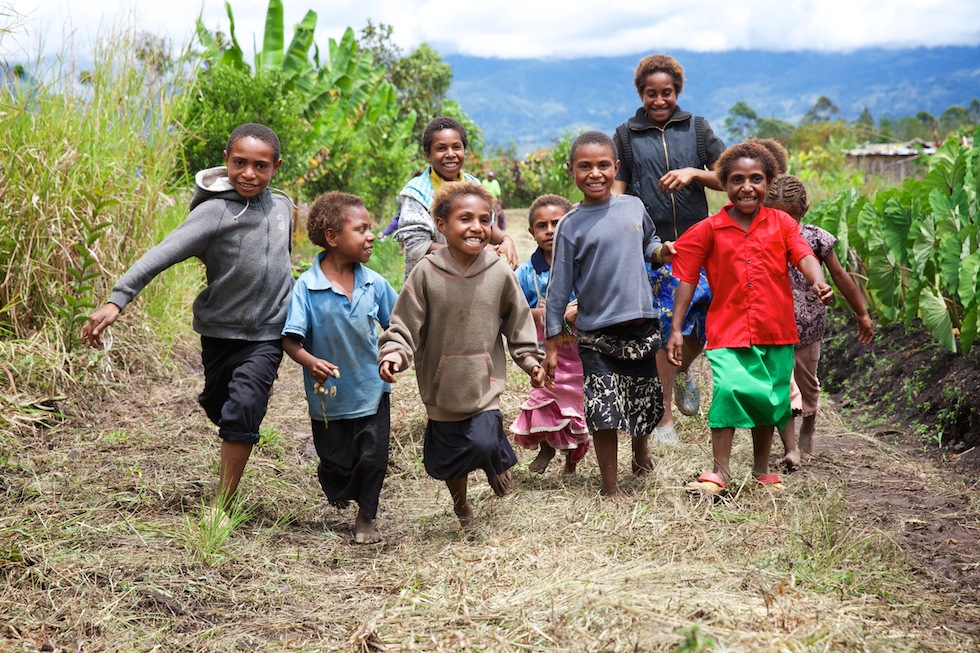 Children play on a road the community hand built to connect their village of Grisa to the main highway. The project to build the road started after a Community Conversations session identified self reliance and connectivity as key ways of improving life in their village. 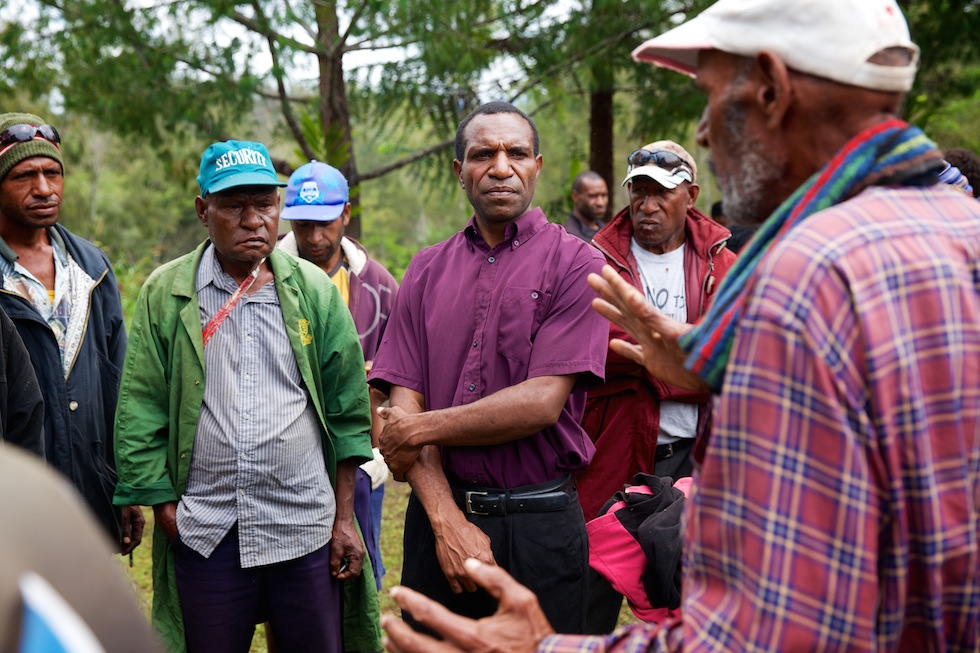 Dominic listening to community members in their home village of Grisa in Banz area of Jiwarka Province, Papua New Guinea.

Dominic described how his community has changed. He said, “Before the community conversation, we were just like any other community. We had no respect, adulteries, divorces and inequality in gender. A lot of people drink in our community and go partying in night dances. This has declined to the point where no one is doing it anymore.” 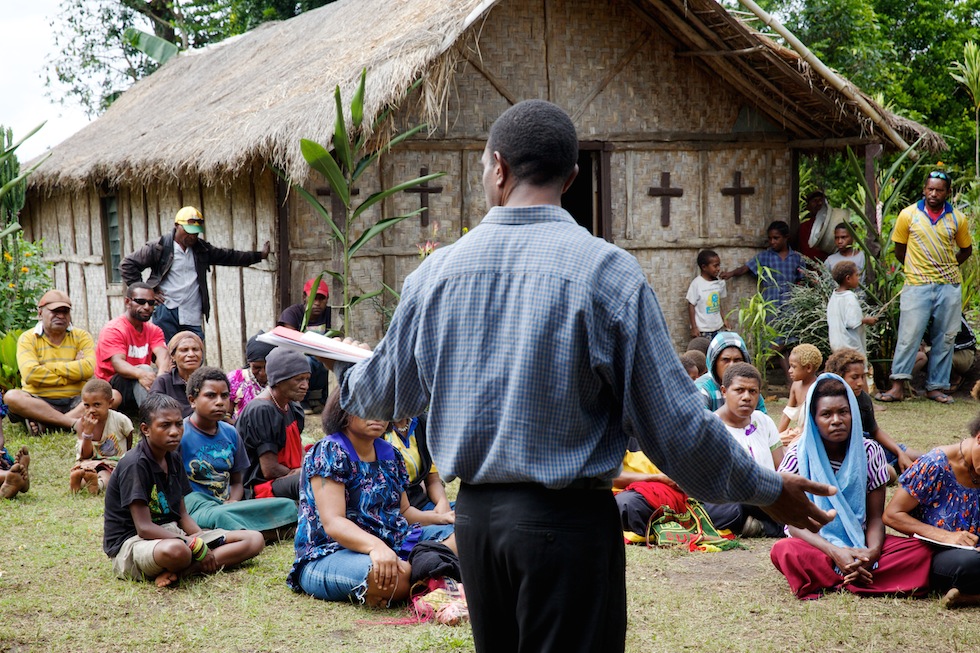 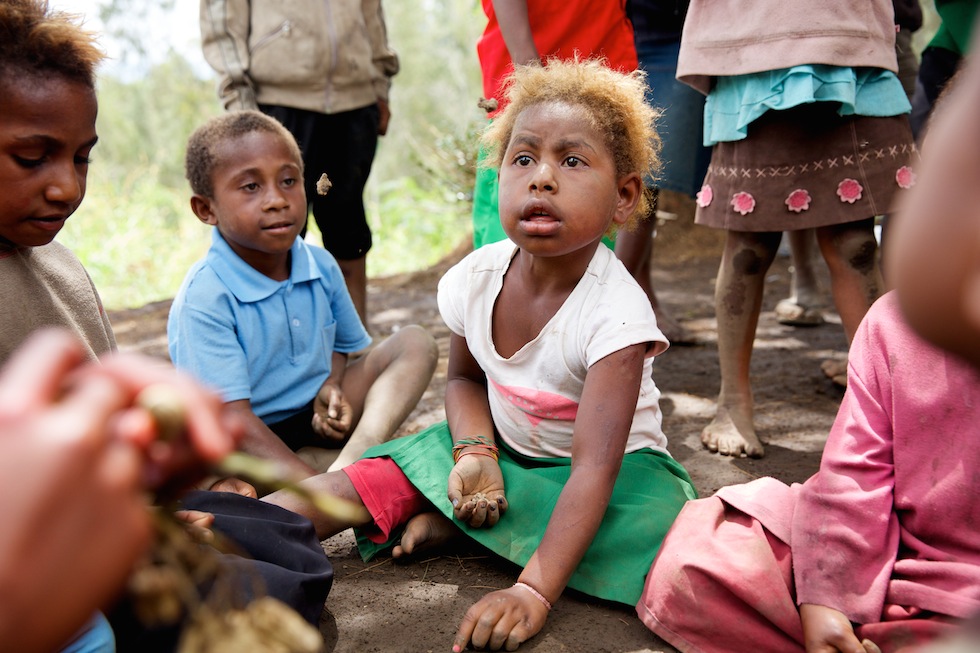 Children play whilst community members gather for a meeting in their home village of Grisa.

Whilst I was there, Dominic was helping teach on a week long workshop for community volunteers who wanted to hold Community Conversation sessions in their own villagers. Ranging from teenagers to adults, most of the volunteers had either experienced or had been involved in many of the issues that beset these remote communities.

“I have seen changes in people’s lives and feel very proud. As a facilitator of Community Conversations I feel proud that I can contribute something to the community meaningfully.” – Dominic. 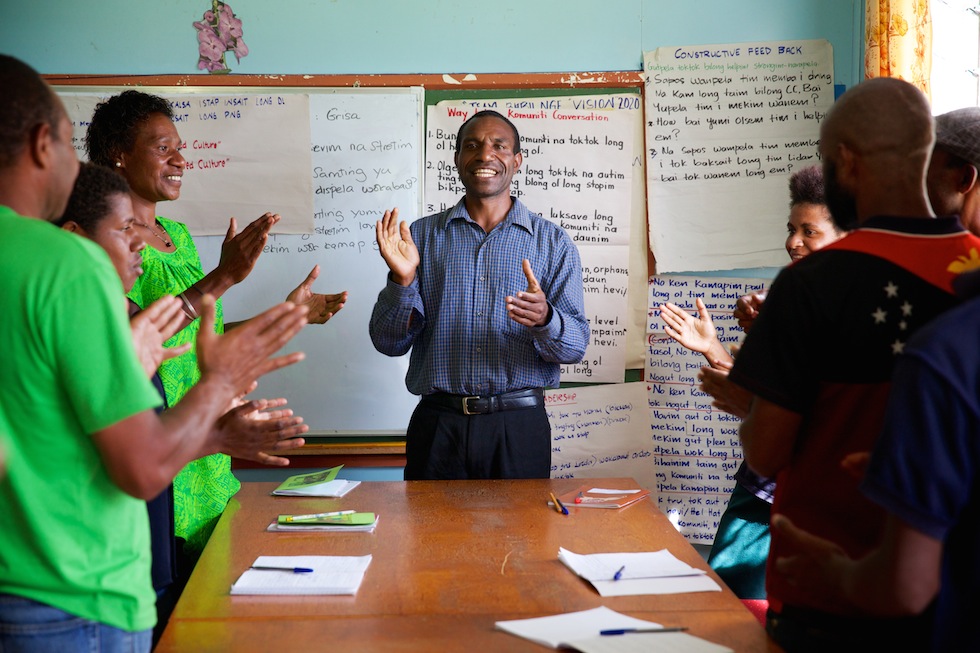 Dominic conducting a training session with other facilitators and students during a week long Community Conversations workshop held at The Voluntary Counselling and Testing Centre at the Sisters of Notre Dame in the Banz area of Jiwarka province, PNG highlands. 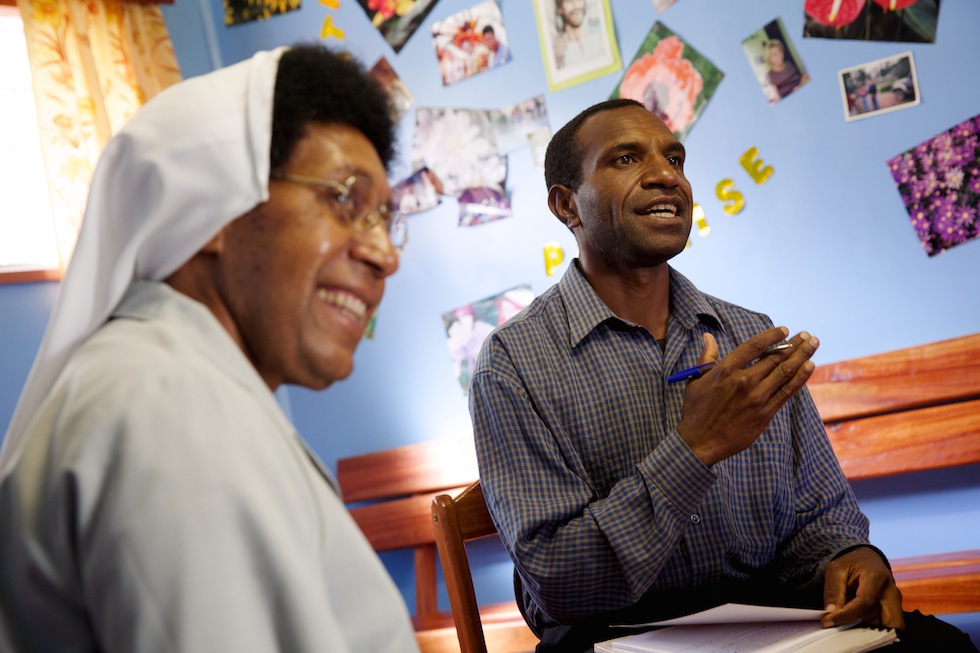 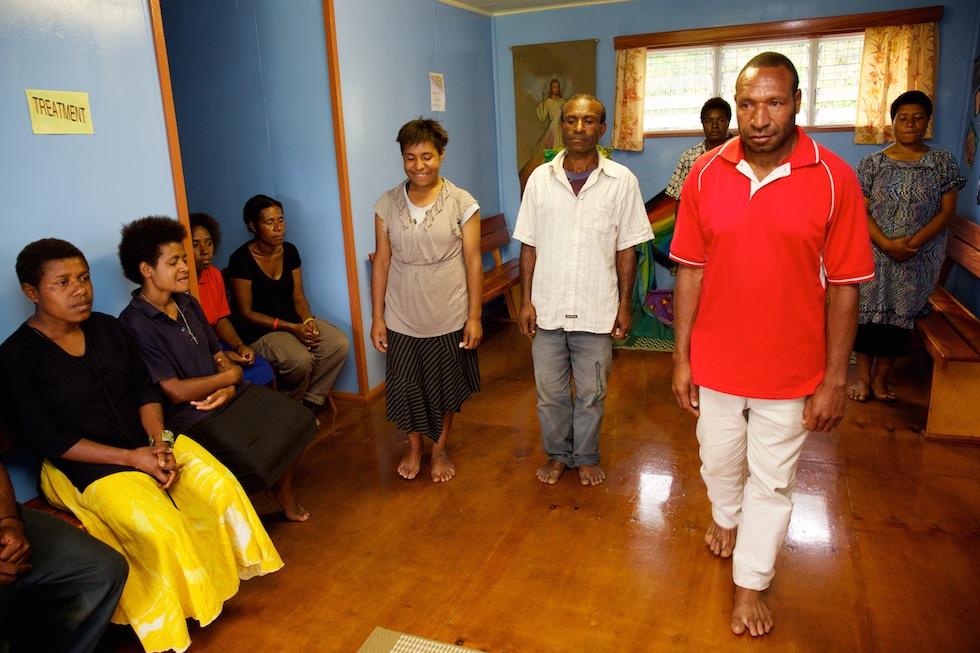 Dominic conducting a Power Step training session with other facilitators and students during a week long Community Conversations workshop.

Dominic has seen changes in himself as well as his community. He said, “In the past, I am the one that make the decision. I am the boss of the house. After getting schooled in CC, I let my wife and children partake in the decisions affecting our family. I have quit on alcohol. In the past, I don’t work in the gardens. I laze around and let my wife work for the family most times. I have changed this attitude and helped a lot in farming my land to support my wife.”

Having felt the impact the program has had on his home village, Dominic is confident that Community Conversations can make a difference to other communities.

“Firstly, attitude must change and people should realise their potential and power they have within to develop their province and country as a whole. I am not a leader or politician but I believe this can be achievable.” – Dominic. 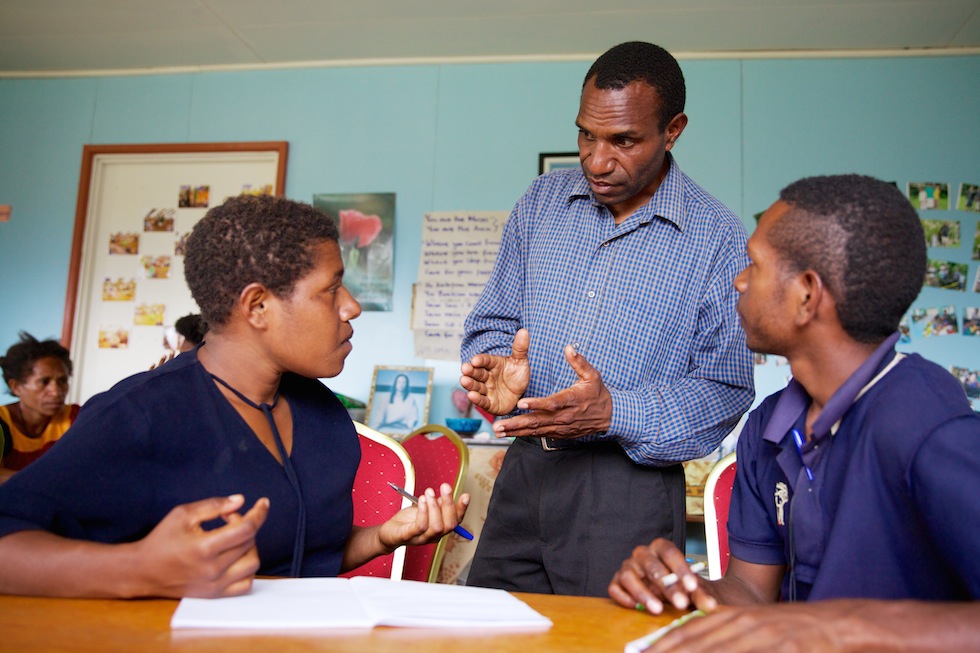 Dominic talks with students Ethally (22) and John (20) during a week long Community Conversations workshop. They volunteered to be part of the program and will return to run sessions to help identify and overcome their own communities issues.

“I find much happiness when I see my community in peace, and my children safe.”- Dominic. 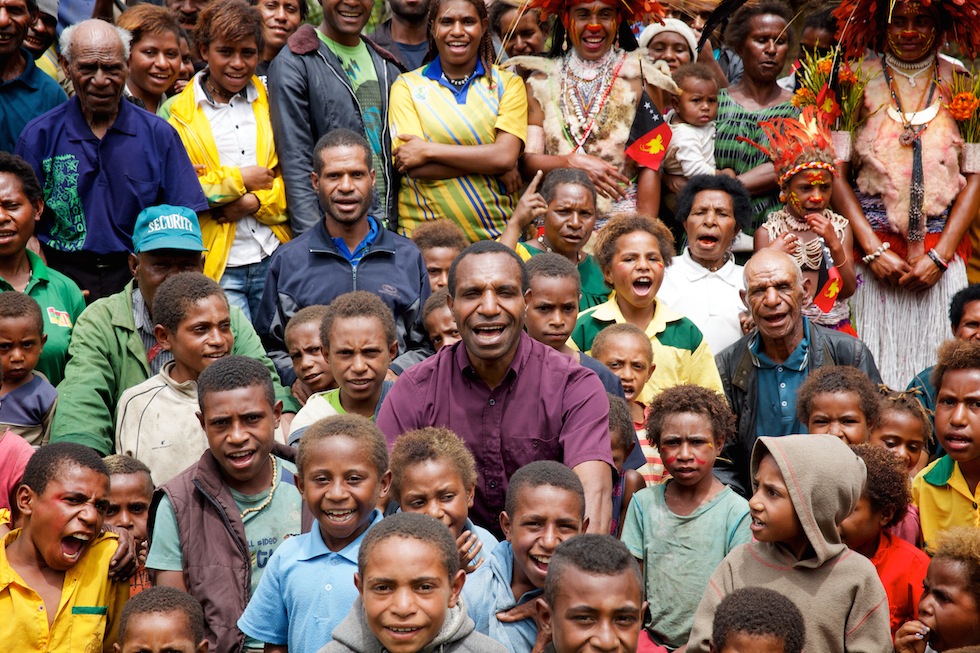 Dominic surrounded by community members in their home village of Grisa in Banz area of Jiwarka Province, Papua New Guinea.

All of these photographs are copyrighted, so please do not use them without permission of the photographer or Caritas Australia.