Images and film shot on assignment for Caritas Australia as part of the Project Compassion 2018 appeal.

Janaki was forced to marry at 12 years old into an abusive family in Surkhet district, Western Nepal. Despite losing her husband three years later and being ostracised by her community, she now runs a successful tailoring business and is a strong advocate against domestic violence and forced marriage.

Janaki was at school when her family situation changed her life.

‘While I was studying, our economic status was poor and my parents had to go to India for medical treatment. Being the eldest, I had to manage all the household work and send my brother and sisters to school, after that I could to go school.” Janaki said.

Then her grandparents followed tradition and forced Janaki into an arranged marriage with abusive in laws. Her mother and father were unaware about her marriage, but her grandparents insisted she was married before their death.

“At the age of 12, I was forced into marriage although I was not ready for it. I can’t even explain the hardship I had to face at my husband’s house. ” – Janaki

‘Although I used to give my best, my father and mother in law were never satisfied and they used to scold me for no reason. I used to share my pain with my husband but he used to say to me to ignore these thing and convince me by saying they are old so not to take it seriously.’ she said. 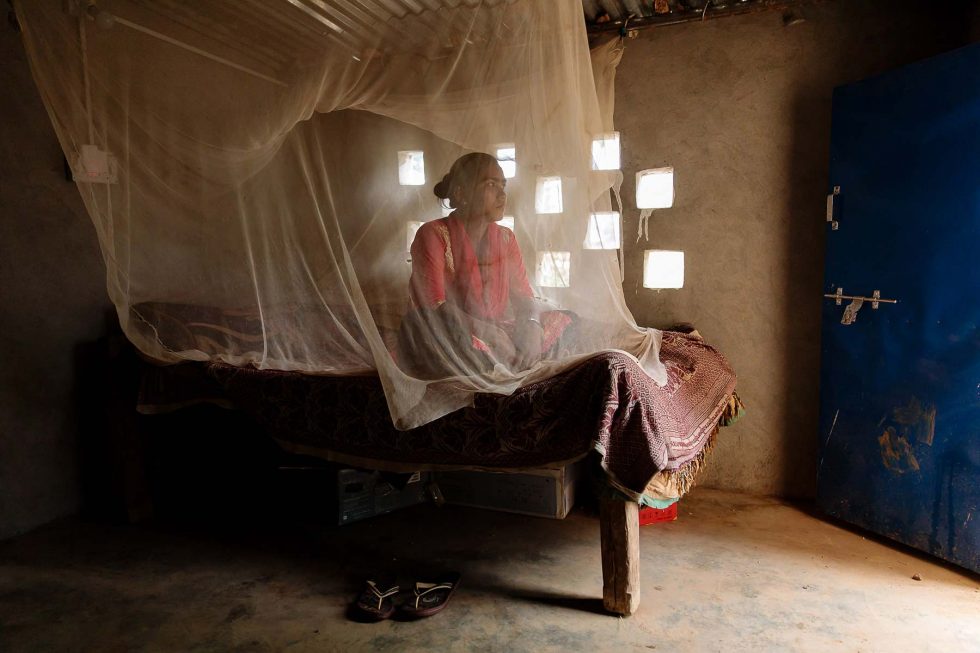 Janaki pictured sitting on her bed at her family home in Surkhet district in Western Nepal. Janaki returned home after being forced into marriage aged 12 and her husband died three years later from typhoid.

Three years into the marriage, her situation became even more precarious when her husband fell ill with typhoid. They couldn’t afford to get him medical treatment and he died. Her in laws blamed her for his death and she was ostracised by them and her community.

Her parents had returned from India, so Janaki went home. She explained, “I used to cry every day and every night. The neighbours and villagers used to backbite against me. After the tragedy of my husband, everyone tried to force me to remarry. I was so frustrated that I thought that my life was a waste. Slowly I realised that I needed to move on and learn some skills.” 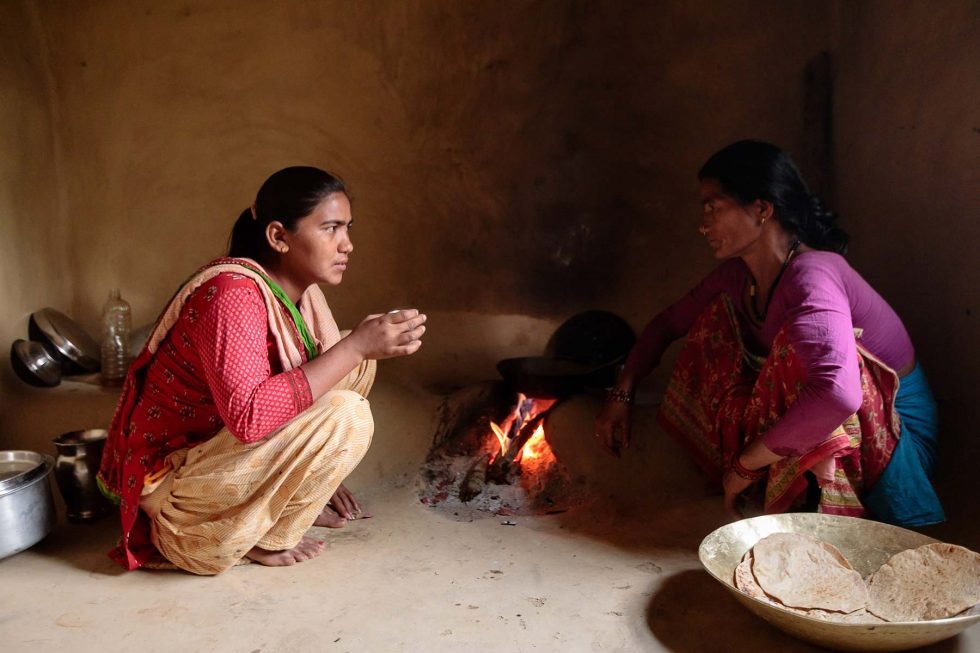 Janaki talks with her mother Khima in their kitchen. Khima and her husband, Dhan where in India seeking medical care when the grandparents followed tradition and arranged for Janaki to be married aged 12. 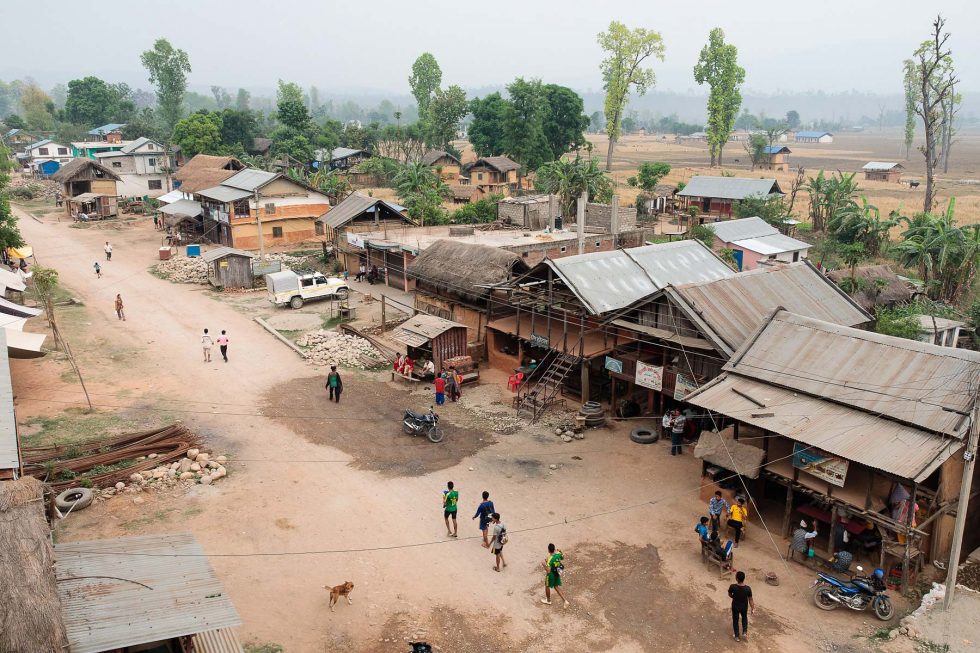 A view overlooking the main street in the town where Janaki lives in Surkhet district, Western Nepal. High levels of poverty and traditional practices contribute to the elevated incidents of child marriage.

After meeting a local Caritas staff member, Janaki was encouraged to join a youth club, run by the Ekata Foundation in her village as part of their Children and Youth Empowerment Program (CYEP).

CYEP helps over 14,000 children and young people each year. It increases the knowledge and leadership qualities of children and youth from disadvantaged families, through the formation of clubs, information centres, networks and libraries. It also provides jobs skills and helps them to create income-generating projects.

Through the club Janaki gained access to a tailoring course and after three months she was one of the best students from the forty participants. The club then organised a loan to buy a machine and she set up her own business.

‘Everybody used to doubt me but I stood on my determination to learn tailoring skills.’ – Janaki 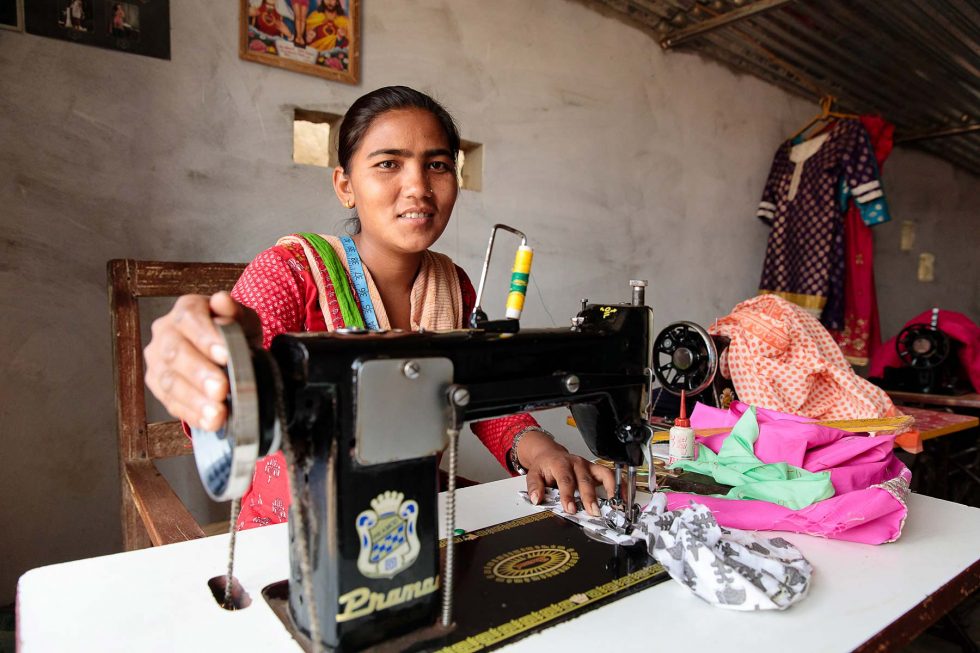 Janaki was encouraged to join a youth club as part of the Caritas Australia, Children and Youth Empowerment Program (CYEP) which improved her confidence and provided her with sewing training and on completion, a loan to buy her own machine. 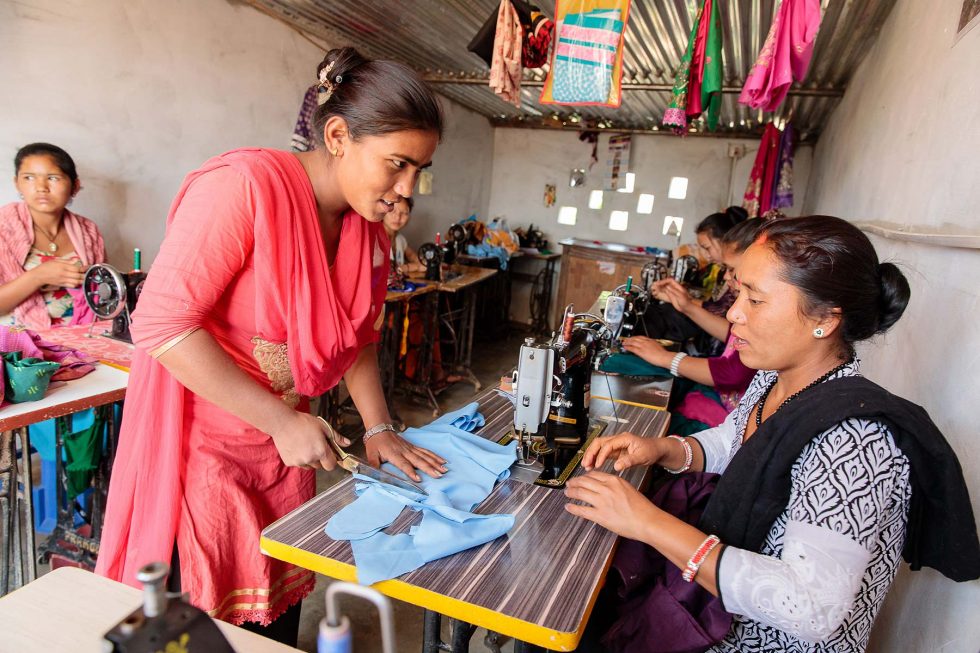 Janaki (left) demonstrating cutting techniques to Khagisara, one of her trainees. Janaki teaches other vulnerable women and youth in her community how to sew so they too can be empowered and earn a living.

Eight years on and Janaki now has eleven machines and runs her business from a workshop next to the family home. She is repaying her loan and can afford to look after her family and support her brothers and sisters with their education.

Feeling the need to help others, she also trains eighteen other vulnerable women, many victims of child marriage themselves, to allow them a fresh start in life.

‘Our sisters who are becoming victims of domestic violence, I wish them to learn this skill so that they can be independent and show themselves to the society that women are not backward. My dream is to help all those sisters in need and make them stable. ‘ – Janaki 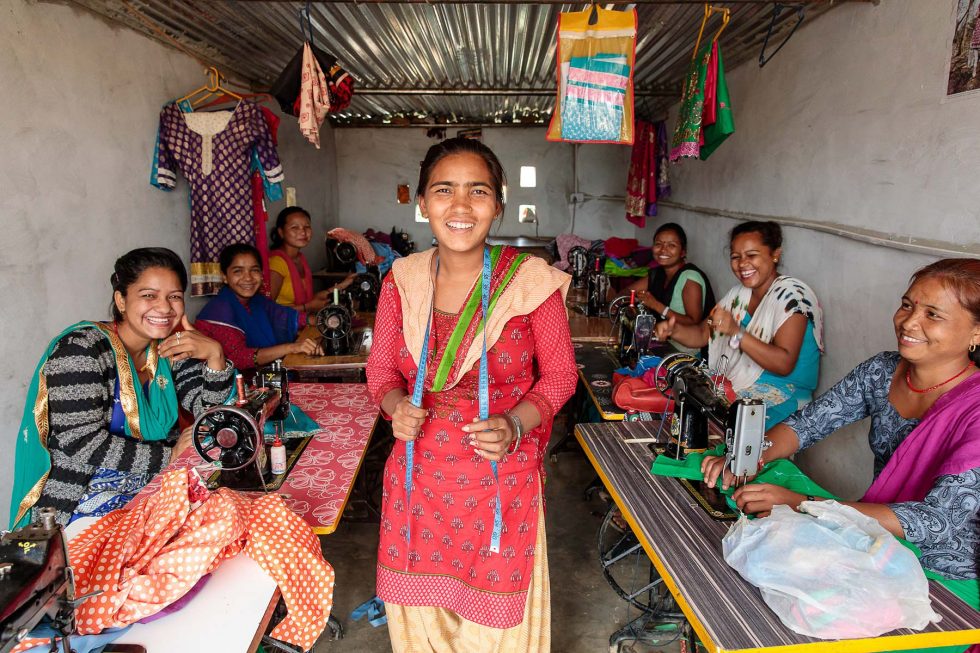 Janaki with her trainees, many of whom have experienced child marriage or domestic violence. Janaki now runs a successful business and has 11 sewing machines to use for her classes.

With increased confidence in herself, Janaki joined the committee at her youth network and soon became its leader. She started to help organise regular campaigns looking into issues affecting their community such as child marriage, domestic violence and workers’ rights.

“I needed to be a leader and serve my community. Alone we cannot do anything. Unity has to be there.” – Janaki 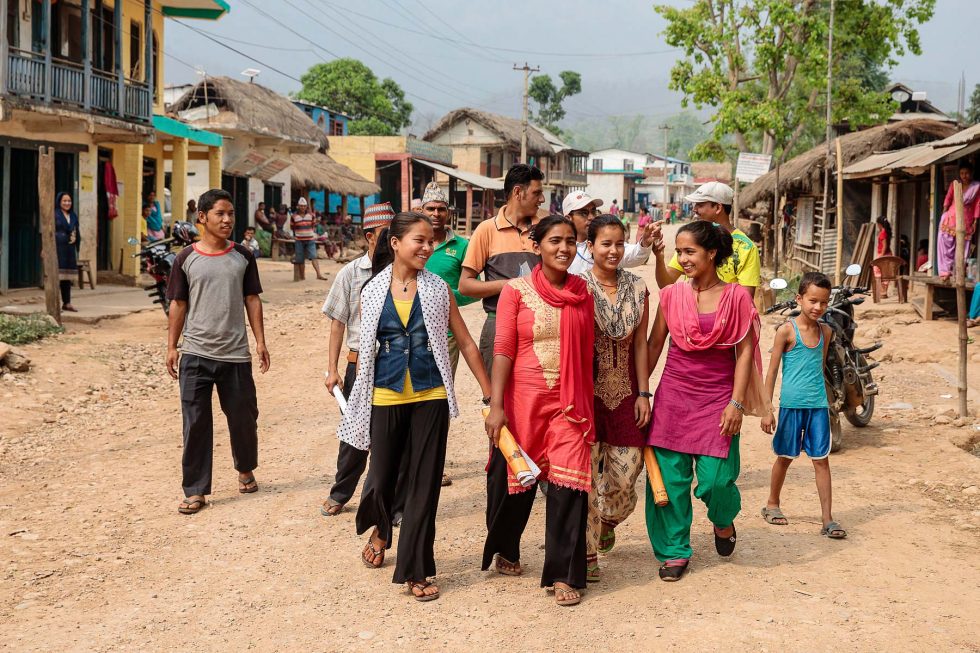 Janaki (centre) and other members of the Youth Network walk through their village to put up advocacy posters about the issue of child marriage. 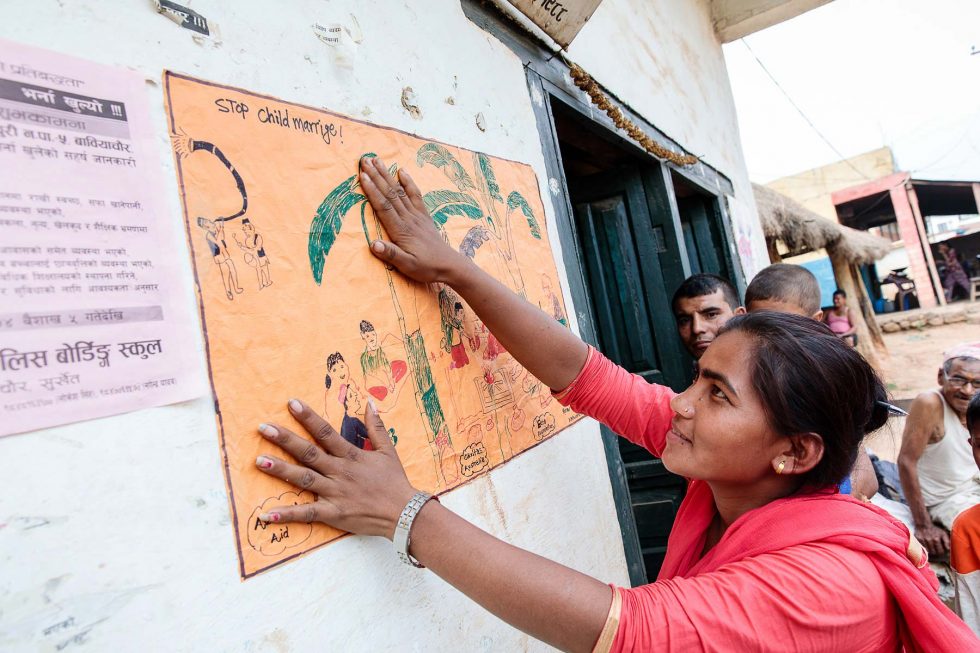 Janaki putting up an anti-child marriage poster as part of a youth club initiative.

The youth club also stages regular dramas for the community as an educational tool to raise awareness and to facilitate group discussion on sensitive subjects, such as child marriage. 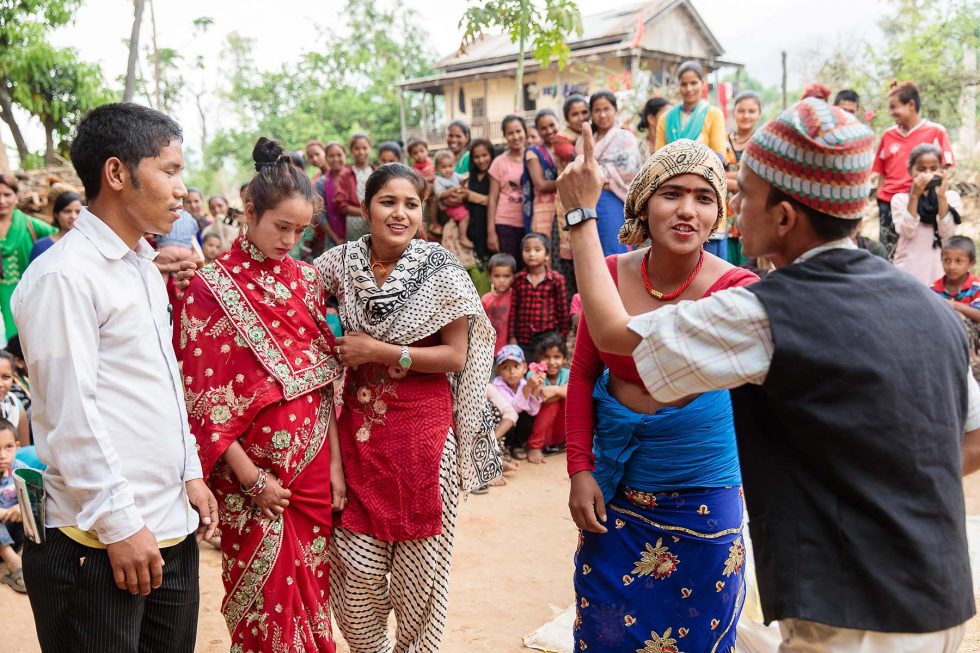 Members of the youth club re-enact a child marriage. 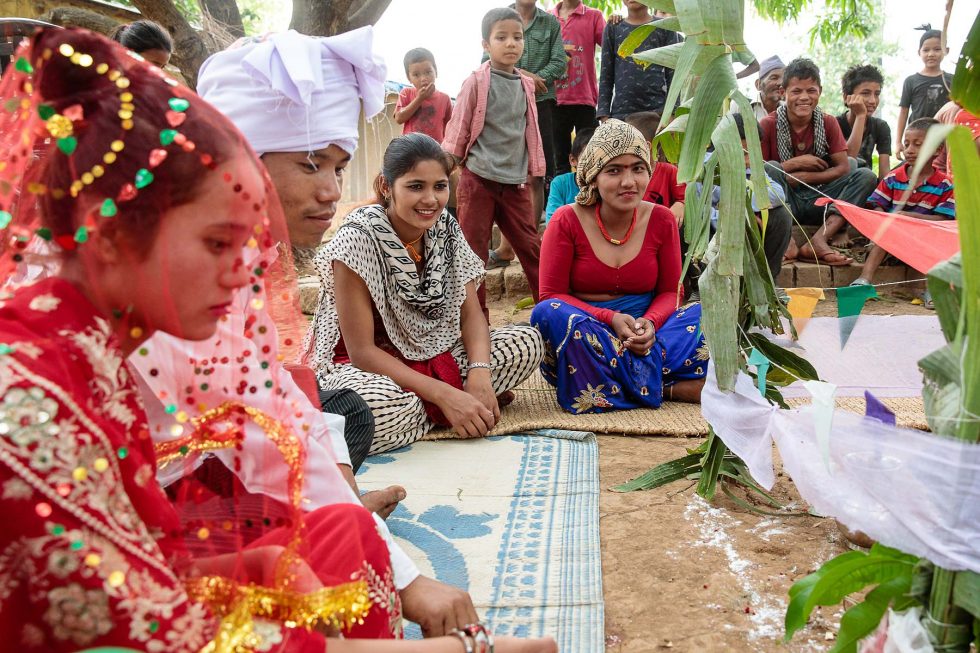 Janaki (right) plays the mother in a drama about the issues of child marriage organised by the Youth Network in front of the local community.

The community now see Janaki as a role model and a strong vocal advocate against domestic violence and forced marriage.

‘Janaki said, ‘I’m happy that I’m motivating and teaching other women like me so that they can make themselves self-dependent. I can feel the change in the behaviour of my neighbour towards me. Before they used to see me with eyes of sympathy and pity. Now they appreciate my work and things have changed a lot.’

‘After the training and motivation from the youth network, I feel like now I am not alone. I have my family and my friends from the youth club. ‘ -Janaki 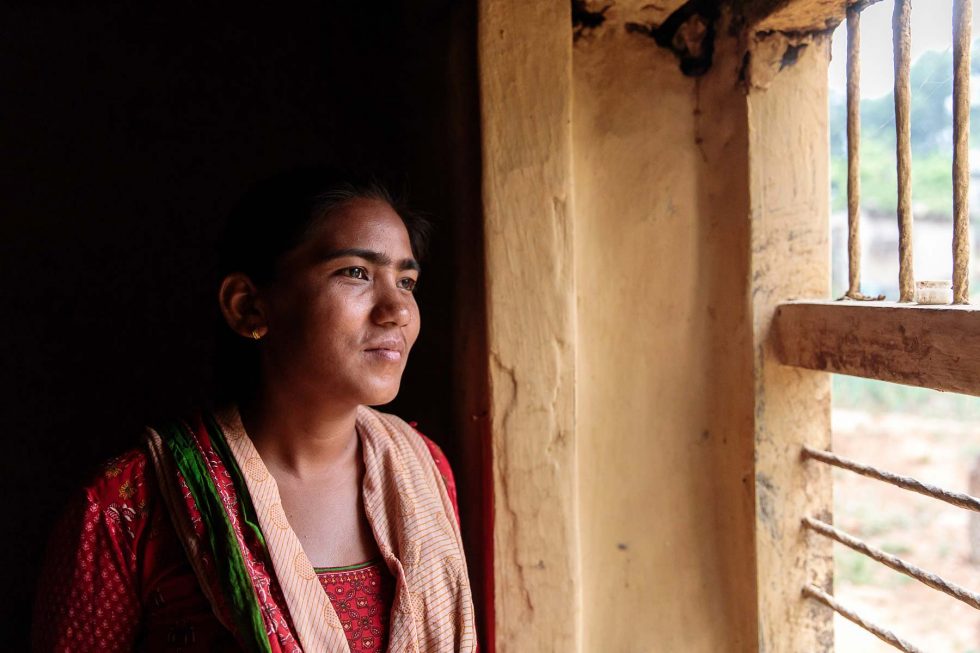 With increased confidence and skills, Janaki has become a leader in the Youth Club and an inspiration to other young people.